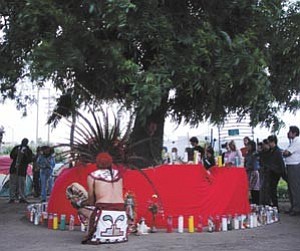 Photo by Klee Benally Each evening, an Aztecan dancer leads a prayer before heading a column of marchers around the South Central farm’s perimeter.

FLAGSTAFF -- Only hours after returning from the South Central Farm -- a 14-acre "Garden of Eden" in a warehouse district in Los Angeles, Klee Benally received a call that close to 100 armed law enforcement officers had cleared the community farm where people had been involved in subsistence farming for 14 years.

At 5:15 a.m. June 13, those individuals who did not want to be arrested left the farm while those who had chosen to remain in civil disobedience locked themselves into a mighty barrier erected around a tall walnut tree toward the front of the farm. Others lay limp in the street to further impede law enforcement from clearing the farm.

Though the police did little harm to people inside the compound, many outside supporters were brutalized, Benally said in an interview at his home on June 14.

Benally traveled to South Central Los Angeles on June 8, where he lent solidarity and support to the group of indigenous Central American and Mexican farmers. While there, Benally said he compared the farmers' siege to how Native American people in northern Arizona feel about snowmaking approved for the ski resort on San Francisco Peaks.

Ironically, while Benally was at the LA farm he said he delivered virtually the same address he'd given at Leupp Public School's graduation ceremonies on June 7 -- about the need to take care of the earth so that she may take care of us.

According to Benally, the City of Los Angeles utilized eminent domain to take the land from developer Ralph Horowitz with the intention of putting up a trash incinerator. Local residents nixed that plan -- and neighboring Los Angeles Regional Food Bank came up with the idea of turning the area into an urban garden. The city agreed, and for the past 14 years, 350 indigenous Central Americans and Mexican farmers have grown their own healthy organic food there -- as well as creating an economic boost to the community through a farmers market.

"The farmers have literally fed thousands of people," Benally said.

Benally described the garden as a "cultural oasis." Photographs he brought back with him show a spiritually rich pastoral environment where families stroll down a central street area and work the garden plots with their children.

"You'd never expect to find anything so beautiful in south LA," Benally said.

The city -- once supportive of the farming effort -- sold the land back to Horowitz three years ago, Benally continued. Subsequently, he added, Horowitz had agreed to consider selling the farm back to its farmers for about three times what he'd paid the city -- and through the efforts that included various wealthy activists and celebrities, the money was raised. Horowitz was no longer interested in negotiation, according to Benally.

On May 24, the farmers received an eviction notice. Immediately supporters from the community and the nation joined the farmers in an attempt to save the farm. They erected barricades and a "lock box" system where activists could chain themselves to gates and a prominent walnut tree.

Julia Butterfly Hill -- who made tree-sitting in the old-growth redwoods of California famous -- called Benally to let him know she was up in a walnut tree in the camp on top of a 26-day fast. This prompted him to make the journey to Los Angeles.

Butterfly was not the only famous activist to respond to the farmers' call for support. Willie Nelson, Joan Baez and Darryl Hannah were also present in the camp.

At 5 a.m. on June 13, more than100 law enforcement officers stormed the farm accompanied by three bulldozers. Activists responded by chaining themselves to the tree, linking arms or clinging to whatever they'd set up to protect the farm. More than 40 people were arrested, some allegedly brutalized. The protesters, encamped for more than three weeks, reportedly remained peaceful.

"This farm is a unique cultural and environmental refuge, a source of subsistence in LA for these farmers, many of whom are indigenous," Benally said. "I recognized that this is the same issue that we face at the San Francisco Peaks, that my relatives who continue to face relocation at Big Mountain face.

"Many of these farmers don't have the money to feed their own families sometimes, let alone buy organic produce, so after they destroy the farm, what's the alternative? What will they do? Will they go to supermarkets where the food is not healthy?"

Benally said that while at Leupp Public School, he'd asked how many of the eighth graders had planted corn that year, and only a handful had raised their hands.

"When we look at projects like the Leupp Community Farm managed by Justin Willie, it's the same thing they are doing in LA," Benally said. "This would be like the town of Leupp selling that farm to developers and then trying to kick the people off of the farm. That would not be tolerated, I would hope. It would appear that our kids are not getting the cultural education that teaches them where their food comes from."

This break in the cultural connection to the land has been happening to indigenous people for the last 500 years, Benally said.

"First our sustenance is taken, then our culture disappears shortly after," Benally said. "The fight is not over."

Benally organized a solidarity pot luck and informational meeting about the South Central Farmers on the evening of June 15 at Flagstaff's South Side Community Garden. A microburst of rain chased the event across the street into the Hive -- a community center concentrating on programs for the youth.

As Benally clicked through his photo presentation, he brought up images of Willie Nelson dancing with a farmer, foods like corn and cacti, shrines reflecting several cultures, Joan Baez facing the press and helicopters circling overhead. From one direction, the skyscrapers of south central Los Angeles tower into the skies.

Children gather in an art tent to produce bright cheerful paintings. A network of youth serve as lookouts outside the barriers, riding their bicycles and talking into walkie talkies. Benally's pictures of the farm reveal a grace and beauty in stark contrast to the warehouses that surround it.

Brett Ramey, the coordinator for the Native American Collective and Bioregional Lifeways Network, said that he saw several parallels between the struggles for the protection of the San Francisco Peaks and the Black Mesa water and coal issues.

"It's about people reclaiming their livelihoods, who do what they can to provide for their families without interference from governments," Ramey said. "We are enslaved enough that we don't have to produce our own food, but that may change. The world is in a very volatile situation. As a community, we need to support community gardens and reclaim a future where we can provide for our families with our own hands."

Ramey told the gathering that many activists have been very vocal about what they don't want, but it is important to say what they do want.

"We have a vision of providing for ourselves," he said. "We want the opportunity to reclaim what is human. We want to work with our own hands to provide for ourselves."

Ramey's BLN has involved native youth in projects directed to provide those skills--working in the Leupp Family Farm and South Side Community gardens on a variety of projects.

"If we want to stay healthy, we need to realize that no one will do it for us," Ramey said.

Adam Trumhoff and other Hive supporters pointed out that the south side garden could face the same problem in the future since the landowner has indicated that he would be interested in developing the land.

In Los Angeles, the South Central Farmers face a July 12 court date. Many who were arrested returned to the farm as soon as they were released, hoping to keep the rest of the farm from being razed.

As Benally put it, if the 14 acres is under cement by the 12th, there isn't really anything to save. To view pictures of the farm before and during the eviction, visit www.southcentralfarmers.com or Benally's blog at Blackfire.net.