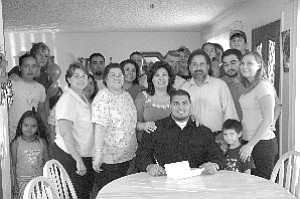 The Guzman Family of Winslow celebrated the signing of Brandon Guzman to Southern Utah University last week. Brandon accepted a full-ride scholarship to the university to play football for the Southern Utah Thunderbirds in Cedar City, Utah.

Many family and friends of the Guzmans came out to celebrate the occasion.

"My decision to attend school there was based on its location and the opportunity to play Division 1AA football," Brandon said. "I am satisfied that I got to this point because it is something I have always set my sights on."

Brandon will be playing the position of left or right tackle, center and guard.

He recently finished school at Scottsdale Community College where during his first year there, his team went 9 ­ 1 to win the Western States Football League. In his sophomore year, he played in the Valley of the Sun Bowl. Between those two successful years, Brandon placed in the top five of offensive linemen in his division.

Brandon is a 2003 graduate of Winslow High School. While at WHS, they beat Blue Ridge twice who were defending state champs at the time.

Brandon will be majoring in Physical Education at SUU so he may work to becoming a coach for college of professional football.

His favorite team is the Kansas City Chiefs, but he said he likes the Cardinals, too, because they are the home state team.

Brandon thanked his WHS coaches BJ Little, and Matt Grace ‹ who is no longer at WHS.

"Ethan Banning, my coach from Scottsdale Community College deserves a lot of credit for my success," Brandon said.

Banning was Brandon's strength coach, and Brandon can bench about 400 pounds now due to his commitment to train while in the Valley.

"I really want to thank my parents who helped me get through school to get to this point where I am now with a scholarship."