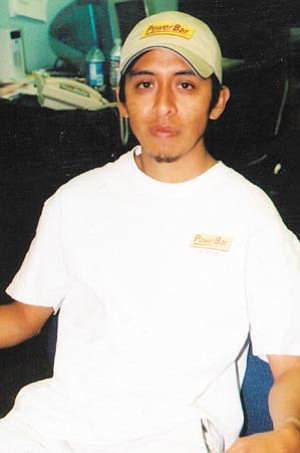 Stan Bindell/Observer Juwan Nuvayakva, a former state champion runner at Hopi High School and All-American at Northern Arizona University for the 2008 Olympics in the 26-mile marathon and the 13-mile half marathon.

POLACCA — Hopi just may have moved a bit closer to being represented in the Olympics.

Juwan Nuva-yakva, a former state champion runner at Hopi High School and All-American at Northern Arizona University, has reached an agreement to train at the High Altitude Olympic Training Center at NAU in Flagstaff.

Nuvayakva, who is Hopi, is training for the 2008 Olympics in the 26-mile marathon and the 13-mile half marathon.

Jack Daniels, director of the High Altitude Olympic Training Center, has trained olympians for several decades and will serve as Nuvayakva’s mentor.

The agreement calls for the training center to take care of Nuvayakva’s room and meals with some sponsors paying for some of his equipment, especially his running shoes.

Nuvayakva hopes to find more funding through corporate sponsors and also hopes that the Hopi Tribe will help out.

This could just be the beginning as the olympic level runners can be paid $1,000 or more just to race in other countries. Nuvayakva was told to have his passport ready as he could be sent to races in other countries at any time.

Nuvayakva, who has taught physical education at Hopi High School for three years, said he is excited about the opportunity and ecstatic about being housed with olympians.

“This is something I’ve always dreamed about,” he said.

Nuvayakva said his focus for the next several months will be on training as he probably won’t be in any races until October. He will be running twice a day and be involved in other training such as weight lifting.

Nuvayakva currently runs 65 miles per week as he runs six days a week. But he will run seven days a week most weeks while training at the High Altitude Olympic Training Center.

Once he is trained, if he qualifies for races he has to be ready to go to wherever the race is located.

Nuvayakva will not be the lone Native American as Alvina Begay from Ganado, Kyle Goklish from Alchesay and Brandon Leslie from Gallup, N.M., are among those in training.

While Nuvayakva is ecstatic about this opportunity, he emphasizes “I’m not a professional because I haven’t done anything yet.”