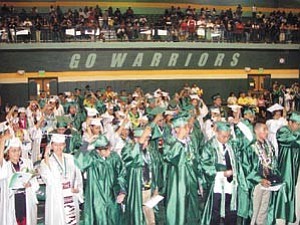 Photo by TC District Media Tuba City Warrior Class of 2006 makes thier graduation official with the changing of tassels.

TUBA CITY ----It was standing room only at Warrior Pavilion on the morning of May 27 for the 2006 Tuba City High School graduation ceremony.

In a precisely timed one-hour event, 169 students heard keynote speakers, listened to both the salutatorian and valedictorian student addresses, participated in the presentation of diplomas, changing of tassels and introduction of special guests.

Meghan Magee, 17, the 2006 Class Valedictorian is of British/German descent and the daughter of Kathryn and Joseph Magee. She plans to attend Santa Clara University.

Michelle Thomas, 18, the 2006 Class Salutatorian, is from the Kiyaa'aani Clan, and the daughter of Elouise and LaVor Thomas. She plans to attend the University of Arizona.