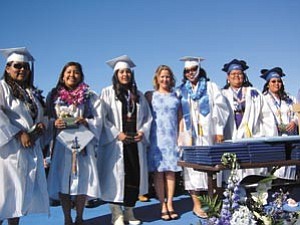 Honanie offered her comments May 29 as the keynote speaker at Hopi High School with approximately 3,000 attending.

Honanie, who graduated from Hopi High 11 years ago, warned the graduates that they will face many highs and lows; successes and failures. She said that life is an ongoing process about finding out "who I am."

She said it will take risk and self-discipline.

"Life is a journey of self discovery. It's not about achieving what others want for you; it's about discovering what you want," she said.

"Seek and discover who you are," she said.

Honanie told the students they should ask for help when they need it. She said Hopi culture is an important part of her life "because it's where I'm from and it's my beliefs."

Honanie urged the students to contribute something back to the community to find solutions.

"Jail is not the answer. We look to you to be the health care professionals," the chairman told the graduates.

Chairman Sidney said Hopi health professionals are needed to find solutions for diabetes, cancer and hypertension. He said the tribe is also working toward placing an ambulance station in Kykotsmovi.

Chairman said Hopi once had plentiful rain and crops, but that has stopped and there are many problems in the world including federal cutbacks on Indian

"But we are survivors working together. Team work is success," he said.

Sidney said other projects in the works for Hopi include a public school, an elementary school for third mesa and the paving of Low Mountain Road. He

said the lack of gaming on the Hopi Reservation makes it difficult, "but the Hopi people have spoken (by voting against gaming)."

"We must stand for sovereignty to be recognized by the U.S.," he said. "We will be a proud nation. Our time is now. Let's not forget who we are. Let's be proud

The chairman said Hopi, Tewa, Navajo and other tribes is what America was built on.

"May the great spirit always be with us," he said.

Valedictorian Brendan Steele spoke about how life can often deliver the unexpected. He said students don't expect to graduate until one day they are getting their diplomas and then it's over as they reach into the unknown.

"I'm sad I'm leaving my home, but I'm excited and hopeful about what's to come," he said.

Steele unexpectedly lost his mother, Kathy Steele, director of special education at Hopi High School, March 9. He said her death taught him to take every opportunity because it's never known when that opportunity will be gone.

Steele praised several of his teachers and his family, especially his parents, for helping him become valedictorian.

Salutatorian Teal Jensen told her fellow graduates that they have the choice to keep going. She said she wouldn't have made it this far without the support of her family and friends.

Jensen also told her classmates to appreciate their parents because they are the ones who helped them with late night transportation returning from school events, helped them by cooking for them and helped them by giving them money.

"I hope every graduate continues on their journey of life fulfillment," she said.

Jensen closed by saying "Go Suns" as she showed support for the Phoenix basketball team playing against Dallas in the Western Conference Finals.

Terra Morgan, student body president, told her fellow graduates not to think that the world is going to come knocking on their door.

"Life is about creating yourself and creating opportunities. It's up to you. Nobody can or will do it for you," she said.

Morgan said her parents have given her the skills and the discipline to succeed in the world, but she added that her fellow graduates can make it in today's world too.

"After today we will go our separate ways, but we will be bound by our time at Hopi High School," she said.

Hopi High Principal Glenn Gilman said this was the first class to pass the high stakes AIMS test. He noted that all of the Hopi High graduates passed the AIMS standards. He said this showed that they met the standards set by the state and Hopi High School.

Principal Gilman said this showed that the graduating class students are accountable.

"Be responsible citizens and creative leaders," he said. "The challenges will be great but obtainable."

Beth Giebus, advisor for Protecting You, Protecting Me, recognized the seven seniors in her program. They mentored younger students about the dangers of drugs and alcohol. This program was made possible through a state grant and Hopi High is the only school in Arizona to offer this program.