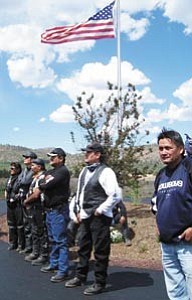 Photo by Karen Francis. Riders at the Piestewa home in Flagstaff on May 17.

The Navajo Nation is once again taking the lead in honoring Native Americans who have given their lives in service of their country. Last week, the 4th annual Navajo/Hopi Honor Run was held to pay tribute to all fallen Native American warriors of Operation Iraqi Freedom and Operation Enduring Freedom.

The delegation attended a ceremony in Oklahoma City on May 23 and planned to attend another ceremony on Thursday, May 25, at Pembroke, N.C., hosted by the Lumbee Tribe. The same day, the Council delegates were scheduled to give a presentation to the 82nd Airborne Division at Fort Bragg, N.C.

The riders rode to Ganado, where they were met by the family of the late Harry Shondee Jr. Council delegate Willie Tracey welcomed the honor run to the Ganado Pavilion where the Ganado U.S. Naval Sea Cadets raised the flags. Also honored at the stop was the late Lance Cpl. Kevin B. Joyce, who came from nearby Klagetoh.

From Ganado, the run went to the Gold Star Mother Park in Beshbitoh. The Gold Star Mother Park, which has been recognized by the Navajo Nation, the state of Arizona and the United States government, is dedicated to the memory of the late Mary Pete Nelson who lost a son, Walter Nelson, in World War II. Nelson's family sang a memorial song and a flag song during the stop.

The riders ate some lunch at the Hopi Veterans Memorial Center before heading out to Flagstaff, to visit the Piestewa home. There, they were welcomed warmly by the family of the late Lori Piestewa who graciously opened their beautiful home to them.

The riders were allowed to tour the house which had been built for the family by the popular ABC television show "Extreme Makeover: Home Edition." They also visited the memorial room for the late Piestewa which holds the honors that she received and photos from her life.

The honor run extended to Tuba City on the first day. On the second day, the honor run came from Tseyi Canyon, near Kayenta, to Nenahnezad, N.M., where the riders paid tribute to the fallen warriors from the area. From Nenahnezad, the riders traveled back to Window Rock for a ceremony to honor the Gold Star Mothers of the Navajo Nation.

The ceremony, sponsored by the Navajo Nation Council, included a candle lighting ceremony, a name reading, blessing of the flame and a rose petal ceremony before the motorcycles riders arrived.

After the arrival of the bikes, King Cavalier, the president of Operation Carry the Flame, presented the National Flame to Judith Young and the Gold Star Mothers of the Navajo Nation. The torch is in honor of all Gold Star Mothers and Blue Star Mothers. Speaker Morgan, who rode in with the bikers from Nenahnezad, and President Joe Shirley carried the Gold Star wreath to the flame as Leroy and Sevier Nelson sang an honor song.