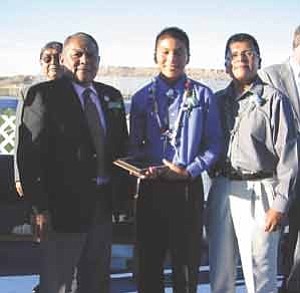 Chairman Sidney spoke at the Hopi Junior High promotion May 24 at the school's football field.

It was a special day for the chairman as his son Paul Sidney was the keynote speaker and his grandson Brannon Sidney was being promoted and received an award for citizenship.

Chairman Sidney told the youngsters that Native Americans have been survivors.

"From here on, you will have a bright future," he said. "You have healthy minds. You will be challenged, but you will make the right decisions."

"It looks beautiful," he said.

Paul Sidney, a police officer for the Hopi Police, praised the parents of the junior high students saying that it is their hard work and values that helped the students get to this point.

He also praised the grandparents and told the junior high students to take care of their grandparents.

Officer Sidney told the students that they have freedom of choice.

"But it's on you to make proper choices and the only thing that will get in your way is drugs and violence," he said.

Officer Sidney said a lot of the Hopi elderly live in fear and have to lock their doors to feel safe.

"You are the guardians of the future," he said. "You need to get a higher education, recognize the elderly and don't neglect them."

Officer Sidney encouraged the students to challenge themselves.

"Be careful and buckle up," he said.

Salutatorian LeAnna Leyva thanked her family members and junior high teachers for helping her reach this point. She said teacher Elden Povatah taught her to never give up. She urged her fellow students to stay away from drugs and alcohol.

Co-Salutatorian Samantha Clah praised her late father Mark Hall, who was a teacher and coach at Hopi Jr/Sr High School. Clah said her father influenced her and her classmates.

Co-Salutatorian Nicolyn Peiffer spoke about potential and urged her classmates to have expectations. She quoted Helen Keller for saying that worse than not being able to see would be seeing but having no dreams.

Peiffer urged her classmates to strive to better themselves.

"Choose to rise to the occasion and have integrity," she said.