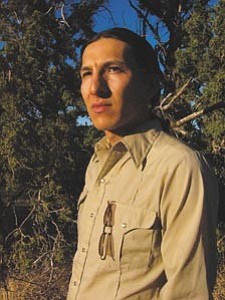 S.J. Wilson/Observer Clayson Benally insists that he has no idea who put a toilet on the mayorÕs car.

FLAGSTAFF ----Kelvin Long, one of many activists opposing the use of waste water in making snow at the Arizona Snowbowl, learned that Flagstaff Mayor Joe Donaldson had taken a comment he had made at a mayoral candidate's forum earlier this month as a threat to the mayor's safety, he was surprised.

Long's statement that Donaldson would not be mayor was not a threat on Donaldson's person, Long said.

Long, who serves as director of the group ECHOES (Educating Communities while Healing and Offering Environmental Support) is just one of many Native American activists who oppose snowmaking on the San Francisco Peaks, which are sacred to 13 Arizona tribes.

Long also objected to a May 13 article published in a Flagstaff newspaper--as well as an editorial printed May 16.

"It is unprofessional and unfair that [the paper] and the mayor implicated the Save the Peaks Coalition and its representatives as having had any part in putting a toilet on the mayor's car," Long said in a written statement given to the Navajo Hopi Observer on May 24. "Our names and affiliated organizations should not have been printed due to the fact that there is an ongoing investigation. The adjudication of justice takes place in the United States courts. By printing our names, we were subject to an undemocratic judgment by anyone who had seen the mayor as a victim."

Long--as well as Clayson Benally, another individual linked to this incident through press--both object to the toilet being placed on the mayor's vehicle during the forum.

"I do not condone behavior that does not represent our traditional beliefs for the mountain," Long said. "Nor do I overlook any other negative representation of our efforts to protect our cultural and spiritual identity as indigenous people of the Southwest."

Long said that he believes the people of Flagstaff recognize that the efforts of the Save the Peaks Coalition was set up for what he called "political mud slinging" as a political tool.

Throughout the campaign against snowmaking, Long has spoken of community unification around this issue.

"We deserve an apology both from the mayor and the [newspaper]," Long said. "We speak out against not only vandalism but against the desecration by the Arizona Snowbowl of our holy and sacred mountain. We hope to receive continued community support for our efforts as indigenous people who work to build a healthier and stronger community. We must work together to maintain a community based on mutual respect and acceptance of all faces of humanity."

Clayson Benally, Klee Benally and Kelvin Long have all reported having been questioned about the political incident--all adamantly insist that they have no knowledge of who may have committed the act.

"I told the police officer who talked to me that I believed that this act was a political stunt that went too far," Clayson Benally said on the evening of May 24. "The officer seemed surprised and said something to the effect of, "So you think this was a stunt?" He indicated that it was a threat against the mayor."

Jeneda Benally, Clayson's sister, joins her entire family in thinking that the event being considered a threat to Donaldson's life is "ridiculous."

Clayson Benally said that reports credited to the mayor that Donaldson had ended the interview on a bad note are simply incorrect.

"The interview is on tape. I ended the interview and thanked the mayor for his time," Benally said.

The entire Indigenous Action Media news interview of Donaldson can be viewed at www.indigenousaction.com .

For excerpts of the May 10 candidate debate held at the Museum of Northern Arizona, visit www.savethepeaks.org.