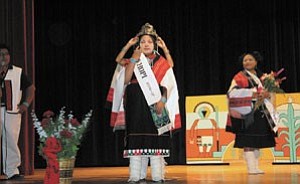 POLACCA -- Due to her knowledge of traditional Hopi culture, self-confidence and essay presentation Tiffany Bahnimptewa of Third Mesa was selected July 14 at the Hopi High School Auditorium to reign as Miss Hopi for the 2006-07 term.

Bahnimptewa was chosen from four contestants to replace the 2005-06 Miss Hopi Jessica Onsae.

"This year was really special because we had four girls who represented all three mesas," said Onsae.

This year's theme "One Moment in Time" outlined the evening's events, which consisted of a presentation of traditional talent by each contestant, then a discussion of a written essay and finally an impromptu question.

According to Lisa Pawwinnee, treasurer of the Miss Hopi Pageant, the second part of the competition was new this year replacing the "modern talent" event.

"Every year the girls write an essay and usually people don't get to see that," Pawwinnee explained. "We felt that we wanted to present what they'd written."

Bahnimptewa danced the traditional corn maiden dance and sang a song depicting the value of family, particularly a young lady's uncle. At the same time a power point presentation played illustrating the practice of corn grinding as a girl grows into a woman.

Other presentations included pottery making, the buffalo dance and how to prepare somiviki, the traditional cornmeal bread.

Discussions included recognition of the Hopi Code Talkers, the history of Hopi education from Bureau of Indian Affairs schools and now returning to culturally relevant curriculum and practices and teen dropout rates.

"It takes a lot to build up the courage to get up there," Pawwinnee said. "It's not about beauty. It's about what they know. It's about their culture and their knowledge of their clan's responsibilityÉwhat do they offerÉwhat do they have to share with their community?"

Onsae said that throughout her term as Miss Hopi she learned to have confidence in herself and her abilities.

"It's really changed my life. In the beginning you start out shy and you end up changing," Onsae said. "I've learned about public speaking, being confident, finding self-confidence, not being afraid to do anything and to talk to people."

She said this strength was important in being an ambassador for the Hopi tribe as she traveled throughout the reservation, the state and to meet with other tribes.

Pawwinnee said the pageant committee works each year with Miss Hopi to develop their life skills and prepare her for the future. "We teach her about not just what's here, but what's outside the reservation and what obstacles they will need to overcome," she said. "We encourage them to be independent, responsible and to learn what's expected of them."

Miss Hopi pageant president Troy Lomavaya explained that the pageant, which was initiated in 1983, was developed to bring out the talent and presentation of young Hopi women.

"We try to tell our young girls out there on Hopi to not be afraid to try new things. To tell them 'You can do it,'" he said.

Lomavaya said that the pageant was established with the support of a former director of the Hopi Cultural Preservation Office to encourage young Hopi girls to learn and maintain knowledge of their Hopi Culture.

Throughout the year, Miss Hopi has the option of choosing a platform to espouse. Onsae chose to promote literacy and traveled to various Hopi schools to discuss literacy and the importance of a healthy lifestyle with students.

Bahnimptwa has selected substance abuse awareness and the danger of underage drinking.

"I've chosen this platform because I want to show kids the importance of making good choices, taking care of their brain, buckling up and not riding with someone who's been drinking," Bahnimptwa said.

"I see [underage drinking] a lot and it hurts because you want to help, but a lot of times you're too busy to do anything," she said. "So I decided to give my time and take the year to focus on helping youth and show them that they have the chance to make good choices."