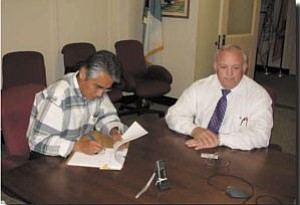 "This is the first time a Native American nation, in this case the Navajo Nation, has been given the wherewithal to sign off on business site leases without having to take it to Washington, to the Department of Interior, for their signature," President Shirley said at the Interior Department building. "I think this is history in the making. I don't believe it's ever happened and Navajo is leading the way."

No longer will the Navajo Nation be required to seek final approval from the Bureau of Indian Affairs to develop its own lands, nor will it be required to wait years for the federal government to conduct appraisals, he said.

Following the signing, President Shirley had a private visit with the new Interior Secretary, former Idaho Governor Dirk Kempthorne, for about 20 minutes in Mr. Kempthorne's office.

"With these new regulations, it puts the decisions in the hands of Navajo on what needs to be done, what documentation needs to be filed, and it's all governed by Navajo law," said Darren Pete, legislative associate for the Navajo Nation Washington Office. "It is one of the truest forms of Navajo sovereignty in history." The Navajo Nation Business Site Leasing Regulations of 2005 authorized the Nation to develop its own regulations, and approve and issue leases for new businesses on Navajoland. The regulations are designed to streamline and shorten the amount of time that has been required for individuals wanting to create a business on the Navajo Nation.

Now, all the requirements related to a "federal action" are eliminated. The regulations will significantly improve economic growth and development on the Navajo Nation.

As the regulations were revised, the President insisted that they give authority for chapter governments with approved certified land-use plans to issue their own business site leases. Not only is this a tremendous opportunity for local governments to carry out the intent of the Local Governance Act, he said, but it also requires local communities to identify land and to plan for economic growth and development.

A huge part of the problem has been conducting land appraisals to determine the amount of rental payment a prospective business would pay to the Navajo Nation. That has always been a BIA responsibility, although the bureau has delayed conducting the appraisals for years.

Currently, 31 businesses that have been approved by the Navajo Economic Development Committee have been held up while waiting for their land appraisals to be completed, some as long as three and four years. Failure to complete the process has contributed to stifling economic development across Navajoland.

Up until now, the Navajo Nation has processed the business applications with the exception of the land appraisal, although it has its own certified appraisers.

Now, just as soon as the Economic Development Division establishes an office to complete the work, the entire process can be done without federal interference.

With these regulations, all the requirements related to a "federal action" are eliminated.

"This goes a long way to self-determination and independence," he said. "It's a thumbs up on both sides. I congratulate your staff for the tenacity to get through the red tape."

Platero, who guided the regulations through the BIA bureaucracy, thanked its staff for their work.

"It is a historical document for the Navajo Nation," he said.

His sentiments were echoed by Dempsey.

"It's going to promote job creation and revenue generation on the Navajo Nation," he said. "I'm happy about it."

President Shirley thanked the council delegates and their legal counsel, Martha King, to the Navajo Nation Washington Office and to the Arizona Congressional Delegation, in particular, Rep. Rick Renzi who took a personal interest in seeing the regulations signed.