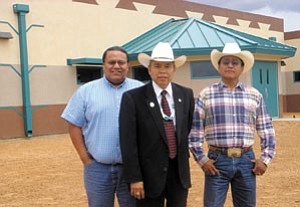 SHONTO -- Navajo Nation Vice President Frank Dayish Jr. spoke at the dedication of the new Shonto Preparatory High School on July 7. The new facility was dedicated through a traditional blessing ceremony performed by a renowned medicine man, John Holiday of Monument Valley. While the facility is new, the high school has been in operation since 1998 serving the communities of Shonto, Inscription House, Kaibeto, Tonalea and Navajo Mountain.

Vice President Dayish congratulated the school board members, community members, parents, school staff and school superintendent for their role in helping the dedication become a reality. He stated, "the leadership of the local school board worked diligently to achieve a milestone for their community."

"The leadership of this community worked to secure grants and donations to construct this beautiful facility, Vice President Dayish said. "It is exciting to learn that each classroom teacher will have a Smart Board, computer, projector, laser printer and a digital camera for presentation of lessons."

He pointed out that each classroom will have student computers as well a state-of-the-art computer lab.

"With all of this excellent equipment, outstanding teaching faculty and a supportive school administration, students have a formula for success," Vice President Dayish said. "It is then up to each student to take advantage of this educational opportunity. A positive attitude and a desire to learn and be a part of technology can prepare students for the future. Shonto is an example of a quality educational system on the Navajo Nation."

In 1996, the K-8 school at Shonto converted to a grant school in accordance with public law 100 -- 297. Immediately upon the change, the K-8 school, Governing Board and school administrative team began the discussion to expand the grade levels to include a new high school. Because of the Bureau of Indian Affairs moratorium on grade expansion, the governing board turned to the state of Arizona to fund a new charter high school.

The school contracted with Northern Arizona University to conduct a demographics study to determine the feasibility of a high school in Shonto. The study found that the surrounding communities had the capacity to sustain a new high school. The new high school was issued a charter by Arizona State Board for Charter Schools in 1998 and school opened in August, the same year. The school was housed in a converted BIA dormitory on the K-8 school campus. In 2004, the BIA closed this dormitory. Despite the closure, the school remained open using portable buildings that were leased. Today, the old high school building remains vacant.

In 2004, land was withdrawn from the community for a new high school facility adjacent to the K-8 school campus. Funding for new high school building was procured from a federal charter school grant in 2005. Construction of the new high school began in February 2006 by Modular Technology of Phoenix.