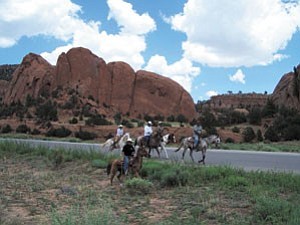 Photo by Karen Francis It has become an annual tradition for council delegates and constituents to ride in to summer session on horseback.Ê

--WINDOW ROCK ----The Navajo Nation Council's summer session began on July 17, with the annual tradition of delegates and constituents riding in on horseback and on wagon in remembrance of past leaders.--

Horse riders began the journey the week before, on trails beginning from Navajo Mountain, Utah and from Huerfano, N.M.. The wagon ride, with Council Delegates Harriet K. Becenti and Alice White, started from Nageezi, N.M.

The first day of session, delegates heard reports from two state governors -- Utah State Governor Jon Huntsman and Arizona State Governor Janet Napolitano. Also presenting reports (with votes) were the Head Start program on the status of its program, Apache County Sheriff Brian Hounshell (56-1), the Economic Development Committee of the Navajo Nation Council (46-4), Arizona State Attorney General Terry Goddard (48-7), Speaker Lawrence T. Morgan on the issue of racial violence in border towns (48-0), the Native American Professional Basketball Team (45-0), the Bureau of Indian Affairs on the status of the Navajo BIA Regional Director (51-2), and the United Mine Workers (47-0). The Council also heard the state of the nation from President Joe Shirley (59-4).

Speaker Lawrence T. Morgan delivered a report as directed by Council during the June 23, 2006 special session when the Council heard a report from Shiprock Chapter President Duane Yazzie and from Della John about the resurgence of border town racial violence.

At that time, the Council directed the Office of the Speaker and the Department of Justice to compile data regarding treatment of Navajos in surrounding cities and towns and to present that information during the summer session. It also directed the Department of Justice to assign two individuals to investigate the shooting of Clint John in Farmington, N.M.

In his report, the speaker noted, "The Navajo public is insisting that, while there may have been improvement in relationships during the past 30 years, there continues to be racism in the border towns surrounding the Navajo Nation."

The speaker recommended public education to the Navajo people on racism and prejudice and the formation of a commission to analyze and report on the existence of racism in border towns. He also relayed that upon acceptance of the report, the plan is to orchestrate an extensive data collection from the border towns to present during the 2006 Fall Session.

The Council accepted the report with directives made by Council Delegate Ervin Keeswood to bring forth legislation to create a Navajo Human Rights Commission and to organize with citizens groups and the Office of the Speaker to prepare to march on border towns.

It was the first time in recent memory that the Governor of Utah visited Navajo land. During his address to Council, Governor Huntsman said he had pledged to visit each of the Utah tribes. His visit was arranged by Office of the Speaker and the Governor through consultants hired by the Speaker's office to work specifically on Utah state issues for the Navajo Nation.

One of the issues that he specifically brought up was the need to revisit and strengthen the memorandum of understanding between the State of Utah and the Navajo Nation, which has not been done since 1996 when an MOU was signed by then-President Albert Hale and then-Governor Michael Leavitt.

Arizona State Governor Janet Napolitano also reported to the Council on the initiatives that the State of Arizona is undertaking for its Navajo citizens, including funding for public housing development and veterans issues.

The Council tabled a report from the Head Start to give the department time to compile requested documents regarding the status of specific centers. The information was requested to give Council delegates an idea of when the centers in their communities may re-open. While the Head Start did not provide timelines for specific centers, the staff presented to Council again on Wednesday during a brief lunch break.

Council Delegates questioned BIA Navajo Regional Deputy Director Omar Bradley on the status of the Regional Director position. Bradley informed the Council that Elouise Chicharello was leaving the BIA for personal reasons and that the position would be re-advertised.

Delegate Ervin Keeswood expressed concern to Bradley that the Navajo Nation was only hearing of the news that same day and that issues of this significant need to be brought to the nation's attention immediately.

Delegate Charles Damon reminded Bradley that the nation has numerous issues that need to be addressed, but could not be addressed effectively without a director in place. Some of the issues brought up by various delegates included land, roads construction and drought issues.