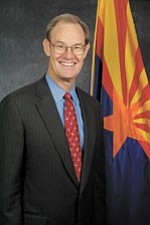 According to Goddard, the purpose of his visit was multifold with the main intention of initiating a dialogue and working relationship between his staff and the Navajo Nation.

"I wanted to discuss how we could work together in ways that would be mutually beneficial," Goddard said.

Goddard, a Democrat, presented a variety of issues that are investigated through his office including:

• "Hot pursuit" situations in which tribal officers are chasing a suspect and cross the reservation boundary into state land.

• High volume off-reservation liquor sales in which the buyer has the intent to resell/distribute the alcohol on reservation lands.

• The impact of methamphetamine manufacturing and sales.

In an interview following the presentation Goddard said that the most serious issues discussed were methamphetamines and voting.

"There is a serious problem of methamphetamines in the state," he said. "I wanted to talk about meth cooks coming up and renting motel rooms then leaving behind a toxic dump. With meth there's incredible pollution that comes along with it."

Goddard said he wants to share the experience his office has had with methamphetamine cases within state boundaries, so that reservation communities could prevent similar situations from occurring.

"My office does all the prosecution for the state and we know what to look for," Goddard said. "Their prosecutors could work with us in training. What we've learned the hard way, we could show them," he said.

He discussed the degree of methamphetamine use on the reservation, which is growing due to its remoteness.

"Meth cooks seek isolated places and want to be hidden," he said. "What they leave behind is a huge problem. For every one pound of methamphetamine, five pounds of residue are left behind. This poisons the land and the livestock."

Goddard also explained the increasingly common situation in which dealers from outside the reservation community push drugs onto tribal children and youth. Because methamphetamines are so addictive, he said, the first time the youth try the drug they are hooked.

Goddard said that his office now heads a state program (off the reservation) called Drug Endangered Children to address the incredible numbers of children who are affected by the presence of methamphetamines in their home and community.

"It's been a very successful program in addressing very dramatic situations in which the children are so stressed," Goddard said.

In reference to consumer awareness, Goddard said his office has several DVDs, training seminars and educational materials to inform people about proper car-buying and identity theft. According to Goddard, the number of individuals attempting to take advantage of senior citizens, especially in reference to medical and prescription drug coverage is skyrocketing.

• Be wary of callers that say "You must act now" or you lose your benefits.

• Do not give out personal information, such as Social Security number, bank account numbers or credit card numbers to anyone you do not know.

• It is against the rules of government run medical providers for their callers to ask for bank account numbers or other personal information over the telephone.

• If you receive a call from someone who claims to represent government run medical provider, ask the person for an address and phone number that you can verify.

When discussing voter identification, Goddard said this could represent a major change in future elections. With Proposition 200 the Arizona Taxpayer and Citizen Protection Act, an extensive list of identifying materials are needed in order for a person to be admitted into the voting booth.

"One thing about Proposition 200 is that it does not apply to voting by mail. So voters can get away from the restriction by voting absentee," he said.

However, Goddard explained, mail-in voting is not common with reservation communities, so this might not be a viable solution.

The future of Proposition 200 is currently uncertain, Goddard said, as it is being argued in the courts between the state of Arizona and the Navajo Nation.