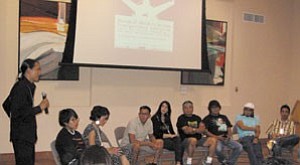 FLAGSTAFF -- In its third year, the Southwest Native American Film and Video Festival recognized the increasing number of Native American films and filmmakers emerging throughout the region. Held July 14-15 at the Museum of Northern Arizona and Coconino Center for the Arts in Flagstaff, the festival included contemporary films, videos and compelling discussion.

"As Native American filmmakers, we struggle to make films that are true to ourselves," said director Dustinn Craig (White Mountain Apache). "Now we have a chance to tell stories the way we want them to be told. I just follow my heart."

Craig, who is preparing to create a documentary with PBS to be aired on "American Experience," was part of an 11-member panel of filmmakers, which discussed the definitions of native film, challenges of the industry as well as the future of native filmmaking.

Shonie De La Rosa, director from the Navajo Nation, explained that through time mainstream media has created a stereotypical Native American, which filmmakers are still expected to uphold.

This imaginary depiction of an "Indian" village with people living in tipis down by the river, which many U.S. citizens still maintain, is one of the driving forces behind the type of films he makes, De La Rosa said. When many tourists visit the Navajo Reservation, he said, they still expect to see this idea that has been created through movies.

"Tourists come up there and say, 'Where are your tipis? Where are your horses?'" De La Rosa said. "I think when we make films, it's important to maintain integrity and honesty. This is a huge responsibility to keep that integrity, to be honest with ourselves.

"We can't consider anything native if we bow down and compromise," she said. "It's yours -- it's native -- if you feel that you've fought for everything you wanted in your film."

In "Taking it Back," a film directed by Leahn Cox, a teacher at Rough Rock High School, student/actors commented on the responsibility to undo misrepresentative stereotypes.

"We find ourselves struggling to define ourselves and tell the media who we are," said the actor. "We're wasting our time."

Director Norman Brown (Dine) presented an additional purpose for making films. "My first audience is Navajo and my elders. That's what really motivated me to do what I'm doing," Brown said. "Our tie to the land and being Navajo people: it's a truly unique experience that only we have."

Brown and many panel members emphasized the fact that Native American filmmakers need to remain united throughout differences in opinion. To be successful in the future, they said, Native Americans need to support each other's work and varying ideas.

"The point of this is not to find the answer," Benally said. "We are the answer."