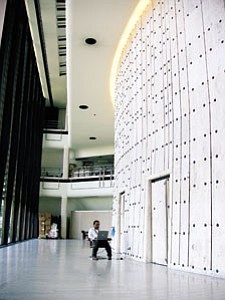 GENEVA -- On June 29, indigenous rights advocates celebrated a mark of achievement as the United Nation's Human Rights Council (HRC) adopted the proposed U.N. Declaration on the Rights of Indigenous Peoples (Declaration), with a vote of 30 in favor and 2 against.

The Russian Federation and Canada were the dissenting votes, as 12 other countries abstained and three countries were absent. The United States is not a member of the newly-established 47-member Human Rights Council.

--"For what seemed like a daunting task, we have witnessed a turn-around in our prospects this week," said Council Delegate Rex Lee Jim from Rock Point Chapter, who represented Navajo Nation interests at the HRC meeting in Geneva, Switzerland during the past two weeks. "The Navajo Nation favored a consensus vote on the issue, but the general preference--as you can see by the vote--was for a majority vote."

Upon hearing of the vote, Hogback Council Delegate Ervin Keeswood, who has also--advocated--on behalf of the Navajo Nation in reference to the--draft declaration,--said the agreement should have been reached by consensus, rather than by vote.

"Since 1995 the Navajo Nation has been involved in this negotiation. While we understand there must be conclusion to the drafting of the declaration, we find it unacceptable that a vote was taken on such an important document. The Navajo Nation's participation was to promote our interests, as well as the interests of all indigenous peoples through an agreement by consensus. We are concerned that the declaration as approved is merely a document that is not binding upon any country of the world," Keeswood said.

"The Indigenous Caucus is ready to celebrate," noted Jim in e-mail correspondence from Geneva on June 28, anticipating a vote on a tabled motion by Peru to adopt the Declaration. "But it has been stated that the real work is ahead of us -- that more work needs to be done lobbying states for the General Assembly."

The HRC began its first official session on June 19--with selection of officers as the first order of business. The council elected Luis Alfonso de Alba of Mexico as its president.

Created through internal realignments to address human rights issues, the HRC replaces the former Commission on Human Rights inheriting many of the former commission's work. The HRC concluded its first session on July 3.

By June 26, the HRC identified five thematic issues which were based on statements made by member states, observer states and officials from the previous week. The thematic issues included human rights issues of Palestine and other occupied Arab territories, addressing incitement of hatred and violence, addressing the human rights of migrants and observing the roles of defenders in promoting and protecting human rights.

According to Jim, the Canadian delegation aggressively lobbied to postpone the consideration of the declaration. Jim said this angered many indigenous rights advocates because Canada's proposal seemed to undermine the years of work put into the document.

Working Group chairperson Rapporteur Luis-Enrique Ch‡vez of Peru issued a final report in March, referred to as the chairman's report. The chairman's reported text is the latest version of the draft declaration and was the version considered by the HRC this week.

On June 27, the Working Group established by the former Commission on Human Rights presented its report on the latest version of the document. It was at this time that the Canadian delegation once again requested the HRC consider postponing the work on the document until September. By Wednesday afternoon, however, it was widely regarded that the Canadian delegation would withdraw its recommendation and efforts to postpone the work.

"Many indigenous representatives scowled at Canada's effort to postpone the work," said Jim. "For the Navajo Nation, while we felt it was important to try to improve upon the text of the document, it was difficult for us to advocate quick consideration for a chance to improve the document."

--"The document, as reported by the chairman of the Working Group from the former Commission on Human Rights, was weak on lands, resources and territories and self-determination. This is a major concern for the Navajo Nation. The protection of these rights is fundamental and essential," Jim said. "We are always up against a dissenting notion by the United States that this would never be ratified. A favorable vote by the U.S. at the General Assembly means everything. A No vote from the U.S. will continue to suppress the self-determination of indigenous peoples in the U.S."

(Merle Pete is staff assistant at the Navajo Nation Office of the Speaker.)