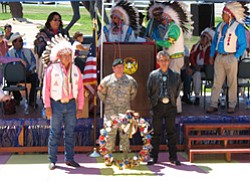 Photo by George Hardeen Tex Hall, chairman of the Mandan, Hidatsa and Arikara Tribe, Lt. Col. Rick Steiner of the 10th Special Forces Group, and Navajo President Joe Shirley, Jr., lay a wreath at the wall of the Apsáalooke Veterans Commemorative Park on June 23 at the Crow Agency, Montana.

National Congress of American Indians President Tex Hall, Oglala Sioux President Cecelia Fire Thunder and the parents of the late Army Spc. Lori here June 23 in a special tribute to the men and women now serving in Iraq, and the fallen heroes of Operation Iraqi Freedom.

They came as guests of Apsáalooke (Crow) Nation Chairman Carl E. Venne on the first of three days of Crow Native Days celebration on June 23-25.

The morning began with the largest horseback parade in Native Country, followed by a traditional honor ceremony at the tribe1s new Veterans Commemorative Park, and a re-enactment of the Battle of the Little Bighorn, which took place 130 years on June 25.

The veterans park is grassy spot where the names of Crow warriors are displayed on a wall.

Elevated on a knoll behind it fly nine flags of the U.S., State of Montana, the Great Crow Nation and the six districts of the Crow Agency. The park contains a huge and impressive bronze statute of a Native warrior, lance in hand, on a rearing horse, sculptures of a bighorn sheep and two large, metal teepees with their covers made of thousands of running horses.

As the tribute began, eight soldiers from the Army’s 10th Special Forces Group of Fort Carson, Colo., parachuted in from two Black Hawk helicopters. Eleven men and their commander, Lt. Col. Rick Steiner, had recently returned from duty in Iraq and were scheduled to be re-deployed there within days.

Toward the end of the ceremony, cedar was burned and each of the soldiers stepped forward one at a time to bless themselves with its smoke and salute.

Lt. Col. Steiner presented the leaders of each tribe with a U.S. Flag that had flown at the joint command headquarters in Iraq.

He said that the 10th Special Forces were the last descendants of the Indian Scouts of the 1800s. They wear a shoulder patch of crossed arrows within a border shaped like an arrowhead. Like the scouts of old, he said, they use stealth, surprise and close contact tactics.

“We see our enemy face to face,” he said.

“All veterans are brothers, no matter what color, no matter what creed,” Chairman Venne told an audience of 300. He said prayers are offered so that the young men and women fighting in foreign wars return home safely.

“The terrorists bullets don1t recognize the color of your skin,” he said.

President Shirley, who was asked to speak, thanked the relatives, friends, veterans and soldiers for the sacrifice they make to defend American freedom and protect Native American ways of life, language and ceremony.

He said it’s the job of a soldier top take an oath and put that oath before his or her own life.

Seven Navajo soldiers, some with wives and young children, have given their lives in the Iraq war, he said. Each of their names was read aloud after he, Chairman Hall and Lt. Col. Steiner placed a wreath at the Apsáalooke Veterans Wall.

“Freedom comes at a great price,” President Shirley said. “Many have been killed in action. Many are still missing in action. The Native American warrior has been a part of all American wars just as they are a part of the Iraq war.”

“It hurts that we have lost so many of our brothers and sisters to defend our freedom,” the President said. “We never forget what our soldiers and their families mean to us.”

“The job of a soldier is awesome,” he said. “They’ve taken an oath to defend freedom, even if it costs their lives.”

Chairman Hall said no one could have thought 130 years ago following the Battle of the Little Big Horn, that Native warriors would be honored and remembered. He said the veterans park was envisioned only six years ago. However, Native American warriors have always been honored by their own people, and today they continue to have the highest military service per, capita than any ethnic group in the U.S.

President Fire Thunder said that following the Battle of the Little Big Horn, the U.S. military began to study the strategy and tactics of the victorious tribes and continue to use those methods of stealth, secrecy and surprise today.

She asked the people to pray for our soldiers and to share prayers with the tribal leaders gathered there because of the difficulty of their jobs.

“They are here because they care about the people,” she said.