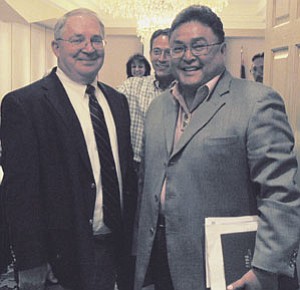 Supervisor White has served as a member of the NACOG Regional Council for nearly 10 years, most recently as vice chair and secretary-treasurer. According to NACOG executive director Kenneth Sweet, White has played an active role on the Regional Council Executive Committee providing his service and insights to the organization and its business functions.

White, who is also a Navajo Tribal Council delegate and part of the National Association of Counties (NACo) said he will focus on improving streets on tribal land, as well as foot trails near Dine College.

White also explained his interest to involve more community agencies and organizations as well as NACOG members in the NACo processes and events.

“I want to get more cities in the region involved, too, and not just concentrate on the tribes,” White said.

White said he will not run for reelection to the Navajo Tribal Council because he intends to concentrate his energy on bringing the county governments and funding together through NACOG.

“I’m really excited to work with everyone in that body,” he said.

NACOG is a nonprofit membership corporation representing local governments within the four Arizona counties of Apache, Coconino, Navajo and Yavapai. It provides a wide variety of services including Head Start programs, elderly and community services, and regional planning activities. NACOG employs a staff of 500 located at sites throughout the four-county region.

“We are extremely pleased to have Supervisor White serving as the new Chairman of the NACOG Regional Council,” Sweet said. “In the current federal budget cycle, the organization needs strong regional leadership and advocacy on behalf of the member agencies and the programs serving their counties and communities. Supervisor White, the first Native American to hold this position, brings years of experience to the position and has demonstrated his strong commitment to the organization.”

The NACOG Regional Council serves as the governing board for the organization. It is made up of elected officials appointed from the local governments that belong to NACOG as ell as private sector members appointed by the regional council. There are currently more than 40 members serving on the Regional Council representing the four counties, 22 cities and towns, active tribal governments and private sector representatives.