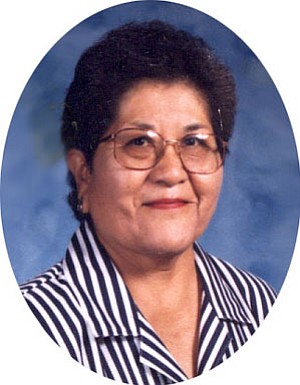 Alice moved to Winslow in 1945, where the family worked on the LaPrade Farm. She attended school here until her sophomore year at Winslow High School. As a junior, she attended North High School in Phoenix and shortly thereafter, met and married Johnson Henry Stacey Jr. During their 10-year marriage, she gave birth to four children, Johnson, Frank, Anna, and Miriam Stacey.

After her divorce, she moved back to Winslow. She began working for the BVD Company and attended night school to obtain her GED. During this time, she met and married Sammy Baca Sr. and gave birth to a daughter, April Baca.

In l976, Alice began working for the Winslow Unified School District as a teacher’s aide with the Special Education Department. She worked at the old Washington and Lincoln schools, as well as the Dome School. She enjoyed helping the children of Winslow and was always concerned about them.

In 1998, Alice retired from the Winslow Unified School District, after 22 years, and settled into retirement with her husband Sammy.

They enjoyed traveling and spending time with family and friends in Winslow, on the Hopi Reservation, and in Bernalillo, NM.

Alice and Sam enjoyed spending as much time as they could in Hotevilla, on the Hopi mesas. They loved being with family and friends there.

They also enjoyed attending sporting events; especially the Winslow High School basketball games. She continued the tradition despite the passing of her beloved husband, Sammy, in 2004.

Alice loved her hometown of Winslow and all of the wonderful friends she and Sammy had made over the years.

Alice was preceded in death by her husband, Sammy Baca; her parents Percy and Anna Lomahquahu; a brother, Harris Lomahquahu and her sister, Bessie Poleheptewa

Memorial services for Alice were held June 12 at the Church of Jesus Christ of Latter Day Saints in Winslow, Ariz., with Bishop Ted Cox officiating.

Arrangements were under the care of Norvel Owens Mortuary.