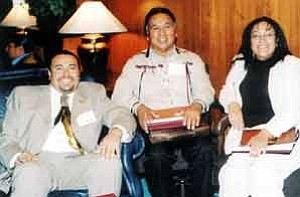 Yavapai Apache Chairman Fullmer said when the tribes meet with the state they now meet as equals. He said the tribes and the state share borders, but need to coexist because they have similar needs and interests.

Chairman Fullmer said the tribes and the state both wants clean air, clean water, an improved economy and to help elderly citizens.

"We share the same dreams and goals of creating bright futures for our children," he said. "There must be quality education that will provide our young people with the knowledge, skills and tools to be successful in our ever changing world."

Fullmer noted that many of Arizona's tribes are located in urban areas and can be called "metrotribal."

He pointed out that three Arizona tribes -- Tohono O'Odham, Cocopah and Quechan -- share their borders with Mexico.

"As tribal nations we understand well the concerns of infringement on the borders and we appreciate the efforts that Arizona is taking to protect our state borders from illegal immigration," he said.

Fullmer said he appreciates Gov. Napolitano's commitment to better funding for education, but he said there are higher costs with getting a higher education so he would like to see better funding for the state's three universities. He noted that many tribes provide funding to supplement the local schools.

Fulllmer said he is especially concerned with pending growth throughout the state and how it will impact the tribes.

"We shouldn't view economic growth as a negative, but we must be aware of the negative impacts and take a proactive approach through planning and law making that protects and minimizes growth pains," he said.

Fullmer has learned that what each government entity--the tribes, the state, county and municipalities--does in their region impacts the others.

"We all drive the same roads, shop at the same stores, work in the same areas, attend the same universities and colleges, love our schools and sports teams, have fun spending time at the casinos, want to appreciate and protect the beauty of our open space and animal life and increase and protect our quality of life," he said. "With this we understand the need to work in cooperation with counties, cities and towns where we are located."

Fullmer said there needs to be positive communication between the tribes, the state, county and municipalities.

"How do we plan for growth?" he asked. "We need to sit down and share with local governments."

Fullmer said the Phoenix area will one day be so big that it will be a megatroplis.

"Common sense is still a good sense to use," he said.

Fullmer said as a social worker that he appreciates Gov. Janet Napolitano's stance on helping victims of domestic violence and sex offenses. He said more can be done about this by the tribes and state working together for more shelters and counseling centers.

Fullmer said meth has become the number one enemy on the Yavapai-Apache Reservation and laws need to strengthened to address this issue. He said this is another issue where the state and the tribes need to work together.

He praised Arizona as one of the top states for recognizing tribal sovereignty. He said Arizona is also recognized for having some of the top Indian leaders in the country.

He closed by saying that leadership is best when there is diversity in the dialogue and alliance in making decisions.

Pascua Yaqui Chairwoman Frias said the day's theme of "Planning, Preservation and Growth: Building Relationships between Tribes, Towns and Cities" was relevant and showed the necessity for relationship building.

Chairwoman Frias spoke about how her tribe has joined the Pima Association of Governments to work with the county and municipalities on regional issues such as air quality and transportation.

She said that with today's tribal sovereignty that her tribe is calling the shots for their own people and economic development. She added that gaming funds are being used to seed other economic activity.

"We are starting to improve our quality of life and health care," she said. "We are able to be at the table so we can represent the views of our people."

Chairwoman Frias said law enforcement is a good example of how tribes, the state and the county can benefit when they work together. She said that tribal deputies have been cross-deputized so they can help with law enforcement both on and off the reservation. She said this enabled their police department to help with a hostage situation and it was a member of her tribal police force that ended up making the arrest.

"Our tribe wants to be a good partner. It's a win-win approach," she said.

But she challenged the legislature to think about how any legislation they come up with this year will impact the tribes in their districts.

Cocopah Vice Chairman Domingues gave the last and shortest speech. He said Native Americans are human like everybody else, but he added the rural tribes like his lack health care and emergency services that many take for granted.

"Let's stick together and solve problems," he said