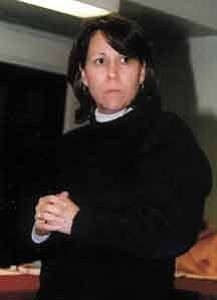 Donna Anderson from the Hopi Tribe gave a presentation about greenhouses and how they can be used to teach students. She gave the presentation Jan. 18 during the monthly PAC meeting at the Hopi Cultural Center board room.

PAC members voted unanimously to endorse the greenhouse project and establish a committee to address all the details.

Anderson, wildlife biologist with the Hopi Tribe's Eco-system Department, said the tribe can help the school with funding, technical assistance and partnerships. She said a greenhouse can be used to have plants or trees that help with cultural or medicinal purposes.

She said greenhouses can be used to teach students about riparian enhancement. She added that students can have seed sales to raise money.

Paul Reynolds, superintendent of Hopi Jr/Sr High School, said the staff wants to integrate the greenhouse into the science curriculum.

"We want your expertise along with the science staff to get students out into the field," he said. "We would like to have a new facility with everything working."

Hopi Jr/Sr High School has a greenhouse, but it hasn't been used in several years. Hopi High Principal Glenn Gilman said a new 25- by 48-foot greenhouse could be purchased for about $25,000. Reynolds said they could consider putting the new greenhouse next to the old greenhouse.

PAC President Robert Miguel said he is excited about the greenhouse project and wants to get it going as soon as possible.

Reynolds said the greenhouse could be in operation by the start of the 2006-07 school year. He noted that the school's governing board has endorsed the greenhouse program.

"This is going to happen. The students will reap the benefits. I thank Robert for bringing all of us together on this," Reynolds said.

Sharon Lopez, who works for the Hopi Tribe's Natural Resources Department, said a committee needs to be formed to look at all the considerations that go into operating a greenhouse. She added that it's up to the community, parents, teachers and students what they want to have in the greenhouse.

"That's the partnership we want to have," Reynolds responded. "This could be a super program that would be relevant to the students."

Anderson said the tribe wants to get kids interested in natural resources so they can come back and help in this area.

Lopez said a greenhouse program could be used to teach students about farming, ranching and gardening.