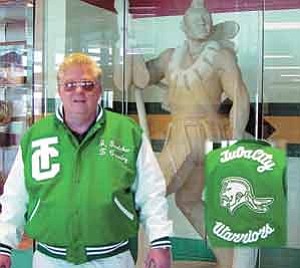 Photo by Byron Poocha/TC District Media Head Tuba City High Cross Country Coach and award winning teacher, John Goatcher has been ÒrunningÓ for student success and personal pride for the past 32 years. This past week, he was awarded a special Warrior lettermanÕs jacket in recognition of his dedication to Tuba City School students from his fellow staff members at TC High. Goatcher also currently holds the TC District employee staff record for not missing a single day of work for the past five years.

TUBA CITY -- It's been 32 years since teacher John Goatcher started teaching at Tuba City District and his exemplary teaching has spilled over into his own personal interest of cross country running and coaching successful cross country teams for Tuba City High School.

Recognizing his personal dedication, care for student well being, and consistent high quality support for his students and native community ideals, staff members at TC High purchased a special TC High Warrior letterman's jacket with cross country emblems that was presented to him at the regular January Governing Board meeting last week in Tuba City.

Goatcher who also holds the current Tuba City District employee record for the past five years of not missing a single day of work was overwhelmed at receiving the jacket.

"To be presented with such an awesome letter jacket was a tremendous honor in which I will always remember and wear with special fondness," Goatcher said. "I truly hope that I have made a difference for our wonderful students at Tuba City High School, because like they say, 'once a Warrior, always a Warrior.' "