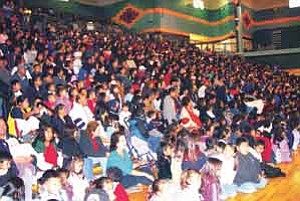 Rosanda Suetopka Thayer/TC District Media There was a record turnout at the Tuba City High School’s Warrior Pavilion on Dec. 21 with several area schools and students awaiting the brand new Christmas toy distribution organized by Native Toys for Tots. The entire south end of Warrior Pavilion was at capacity with happy children who received this generous annual toy giveaway.

TUBA CITY — What began in 1947 as a US Marine Corps Reserve Toys for Tots program in Los Angeles has finally made its long trip to the reservation with the final destination at the Tuba City High School’s Warrior Pavilion.

On Dec. 21, there was record turnout of many reservation area schools including Tuba City District’s own primary school students. All lined up to receive a brand new free toy for Christmas Navajo Police Department, several hundred Marines and local volunteers had been collected for the past year.

A now nationwide effort to make Christmas a special event for disadvantaged or underserved children in remote areas, Toys for Tots gets support from local communities, private individuals, major corporations and even local area students collecting toys, starting in January of every year.

Tuba City area had the full attention of Officer Carolyn Secody, who is a police officer from the Navajo Nation Tuba City Police branch to organize this year’s toy drive for the western side of the reservation— a very complicated and arduous logistics project.

Many of her fellow officers at both Tuba City and surrounding area police departments assisted Secody, and she got many volunteers within the Tuba City community to help on the final day of distribution at Warrior Pavilion.

Marine personnel came from varied areas of the United States to help Secody with her toy drive and were on hand on Dec. 21 to assist with the overwhelming crowd of kids who were completely delighted with their free gifts, which even included 10-speed bicycles.

For more information on how to assist the Navajo Police department on this coming year’s toy drive, contact Officer Secody at the Navajo PD at 928-283-3111 or 3112.