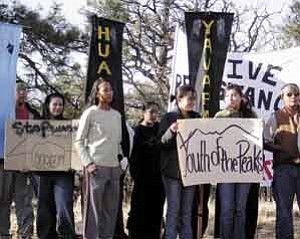 Photo by Clayson Benally On Jan. 12, members of the Save the Peaks Coalition, tribal leaders, environmental advocates and concerned members of the community gathered at the foothills of the sacred mountain to voice their concerns and announce plans to appeal the decision.

FLAGSTAFF -- On Jan. 11, U.S. District Court Judge Paul Rosenblatt issued his decision on the lawsuits filed against the U.S. Forest Service and Arizona Snowbowl in their attempt to allow the wastewater Snowmaking and expansion plan on the Sacred San Francisco Peaks. The following day members of the Save the Peaks Coalition, Tribal leaders, environmental advocates and concerned members of the community gathered at the foothills of the sacred mountain to voice their concerns and announce appeals to the decision at a news conference.

"The federal government felt, and the court affirmed, that the economic viability of the Arizona Snowbowl Resorts Limited Partnership was more of a priority than the beliefs of hundreds of thousands of Native Americans." Said lawyer Howard Shaker who represented the Navajo Nation, Yavipai Apache, white Mt. Apache, The center for Bio logical Diversity, Sierra Club, Flagstaff Activist Network , in a written statement. "This decision will be appealed."

Leigh Kuwanwisiwma, director for the Hopi Tribe's Cultural Preservation Office stated, "I want to express disappointment. The decision doesn't surprise me at all, it's a part of the legacy of insensitivity by federal agencies such as the Coconino National Forest Service on the civil and human rights of many people including the Hopi People." Kuwanwisiwma said, "The tribe will consider an immediate call for an injunction in addition to an appeal."

Jamie Fullmer, the Tribal Chairman of The Yavapai-Apache Nation and Vincent Randall a Tribal Council Historian released a joint statement expressing their disappointment to this "dangerous precedent."

"Recent history has shown the federal courts are not supportive of Native American sensibilities and traditions when it comes to issues concerning the landscape and spiritual health of our People. This decision to move ahead with fake snow may see some short term success, but the long term consequences and repercussions could over time haunt all of us, regardless of which culture you claim as your own," their statement said.

"This is a devastating tragedy for all those who value environmental health, culture and religious freedom." said Klee Benally, Navajo of the Save the Peaks Coalition. "This is a miscarriage of justice. This is a defeat for those who have faith that the justice system is unbiased and indiscriminate, and all of us, native or not, will pay the price."

Carly Long of the Flagstaff Activist Network, a litigant in the case, was hopeful that the appeal would reverse the decision.

"The District Court's decision to allow Snowbowl expansion and snowmaking with wastewater is yet another link in an ever-growing chain that shackles the environment and the people who value it," Long said. "There is still an opportunity for justice to be served at the 9th Circuit level in San Francisco and we will appeal the District Court's ruling in this case. We will persist in our endeavor to ensure that the spiritual integrity of all people whom hold this mountain sacred is upheld and unbroken."

"This is not the end, we have to continue to go forward in a peaceful way, until we let the mountain know that we're not going to give up." Preston said in a written statement.

Coconino High School student Alberta Nells, Navajo, of the Youth of the Peaks stated, "We all realize the sacredness of this mountain, we are all upset by the decision. This is really important for us as the youth, we do this for the generations that are coming, so then they will remember who they are by looking at this mountain, to know what their responsibilities are as indigenous peoples."

Kelvin Long, executive director of ECHOES, along with the Save The Peaks Coalition, is organizing a campaign to stop the City of Flagstaff's wastewater sale to the Arizona Snowbowl.

"The Judges decision was only made at the Federal District level, and is part of a historically crucial case that is predicted to head to the Supreme Court," Long said. "This is a tragedy to humanity; we as indigenous peoples have been murdered by the millions since contact with the European settlers, we have had our lands, languages, traditions, for the most part wiped out, but there are still some of us who are here, and we will continue to be here, unfortunately our existence is not without great struggle for survival and respect."

Shanker described the proposed snowmaking as an experiment without justification.

"No other ski area in the Country, or even the world that we are aware of, uses 100 percent treated waste sewage to make snow," Shanker said. "Posting signs throughout the ski area saying "don't eat the snow" is not an adequate safeguard to protect against the known and unknown risks of exposure to the types of chemicals that persist in this effluent. The potential impacts on children especially, many of whom may be too young to read the signs, have not been adequately assessed by the government."

He urged people to let politicians know about their opposition to snowmaking.

"Regrettably, there is often a rift between what is legal and what is right. We will pursue all legal means to stop this project. It is our hope, however, that all people of conscience will contact their political representatives to encourage them to do what is right." Shanker stated. "Snowbowl is not a destination ski area. People do not travel from across the country and around the world to ski at Snowbowl. Indeed, many of the press reports on this issue have overstated the economic contribution that Snowbowl makes to the Flagstaff economy -- which is marginal. People do, however, travel from around the world to the Flagstaff region to experience the ways of, especially the Navajo and Hopi Tribes. Other than to preserve the economic viability of a private entity, there is no adequate justification for this project."

Jeneda Benally, member of the Save the Peaks Coalition, pointed out the irony of celebrating the struggle for civil rights on Jan 30, Martin Luther King Day.

"The Civil rights movement went to court fighting for their rights and had many wins and losses," she said. "This ruling shows that in this day and age there is still injustice in the legal system. We will continue with our prayers, we will continue to oppose the ongoing attempts to violate human rights. The sacred mountain supports life, so we are strong, and we will continue to defend the sacred San Francisco Peaks. In closing, we leave you with the words of Dr. King, 'Injustice anywhere is a threat to justice everywhere.'"