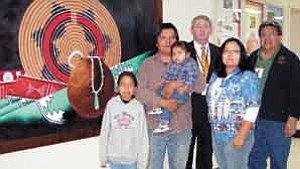 Photo courtesy of Tuba City School District Shonto native artist and recent hospital mural contest winner Tony Begay is shown with his two children and several members of the Tuba City Regional Health Care CorporationÕs Hozho Committee on the day of the unveiling of his new mural for public art at Tuba City.

Begay said his wife saw the art mural advertisement at the Inscription House clinic and she encouraged him to try his luck.

Begay said he has been painting and drawing since he was small child but has taken his art more seriously since starting on the road to alcoholic recovery a few years ago.

He said winning this contest has boosted his confidence in his artistic ability, and he plans on continuing working on other themes and art commissions.

The mural contest is part of the TCRHCC's Hozho goal of enhancing the experience of healing their patients and visitors when in their health care facility and is only one area from a long list of planned improvements.

Some of the other areas of long-range improvement include, new signage in the hospital for clearer visitor/patient directions, more art murals in the hallway designed and painted by local native artists, a new PA system, a year-round arts/crafts showcase, free entertainment in the waiting rooms and eventually in the patient rooms, "greeters" at the front doorway, use of golf carts for patient assistance, bench canopies with misting sprayers for the outside sidewalks, volunteer escort service for patients, funding proposal for a Ronald McDonald House, a healing garden, traditional speakers and consultants, native anthropologists and medicine men and women and piped-in music for the waiting rooms.

"We want to provide a positive and good experience for our hospital patients and visitors" said Ron Milford, part of the TCRHCC Hozho Committee and current facilities manager for the hospital.

There will be another mural contest offered in the near future according to Milford for another corridor at the facility.

The mural winner receives both money for supplies to paint the winning mural and a lump sum commission for the winning design.

Begay, who is from the Todich'ii'nii clan born for Ashiihnii people said he was influenced by his late father's medicine man activities, and his father encouraged him to help him with his sandpaintings when he was young.

His dad, "Mailman Begay," taught the younger Begay to appreciate beauty in everyday life and that inspired the recent theme of "Navajo Values."

The smaller submittal with the Begay's original mural idea will be hung in one of the hospital administrative offices.

"Navajo Values" is an acrylic painting that took a full week to finish, and is four feet by eight feet long.

Begay, "It's a good feeling to have one of my works here that can be enjoyed by members of my own people."