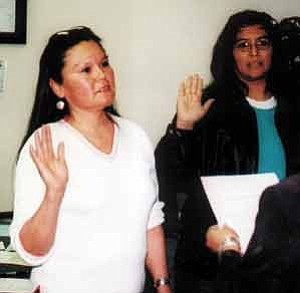 Valerie Koyaquaptewa was elected as president, Steve Bahnimptewa as vice president and Anthony Huma as clerk. All of the elections by the school board were unanimous.

Koyaquaptewa said she didn't expect to be elected as president.

"I will be expecting help from the administration and I hope to follow in Anita's footsteps as a good leader," she said.

Huma, who works as an emergency medical technician (EMT), arrived at the meeting late because he was out on ambulance call. He arrived just in time to accept the nomination as board clerk.

Anita Bahnimptewa said it was a pleasure to serve on the school board and the members can call on her whenever they have any questions. She then left the board meeting to support the Hopi High School basketball teams who were playing against Tuba City High School.

Earlier in the meeting, Bonnie Secakuku and Koyaquaptewa were sworn into office. Koyaquaptewa won re-election to office from Keams Canyon and Secakuku was elected to the seat from Second Mesa.

In other school board business, the school's American Indian Science and Engineering Society (AISES) students gave a report on their trip to the national AISES conference in North Carolina in November.

Justin Lee, a senior, said the trip helped prepare him for college as he learned about different colleges that are strong in these areas.

Tamara Tacheene said the national conference had a lot to offer as students learned about everything from robots from NASA to women's studies. She said she also learned about scholarships in these areas.

Jennifer Bitsoie said she enjoyed meeting other Native American students who are active in the scientific community.

Joel Melvin said his favorite part of the conference was talking to a recruiter from the CIA who emphasized the importance of public speaking.

Lavonne Honyouti, sponsor for the AISES chapter at Hopi High, said AISES gives students a chance to learn about college and careers for math, science and technology. While the group was at the conference, the Hopi AISES also met with Marissa Leslie, a graduate of Hopi High who is studying science at North Carolina State.

Honyouti said the students also met with representatives from IBM, Raytheon and other large corporations during a college fair.

Hopi High Principal Glenn Gilman commended the AISES students for raising more than half of the funds needed for the trip.

During the call to the public, Kathleen O'Neill Manrique said the Gifted and Talented (GATE) students are not getting enough stimulation because the program doesn't have a coordinator.

"I would like to see an action plan to address this," she said.

O'Neill Manrique said she does not believe it would be acceptable for the athletic programs to come to a halt if the athletic director was absent.

"The GATE kids face unique issues. The kids are frustrated when they aren't challenged," she said.

Anita Bahnimptewa, still president of the board at this point, said the administration will look into the issue.