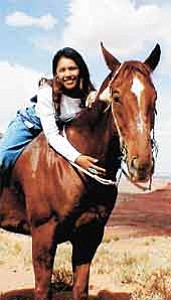 Joining Kayenta’s White was Crownpoint, New Mexico’s Alesia Muskett who won the AIRCA 2005 regular season rookie all around championship, making it a clean sweep for the cowgirls in winning the top honors in 2005.

One rodeo fan remarked “The caliber of entries was, as always, extremely impressive and the dynamism, spirit and energy of the contestants were apparent throughout the season. Thus you see real close standings at the very top, some not determined until the AIRCA Championship Finals Rodeo. Congratulations to all the winners and finalists.”

At the AIRCA standing room only awards banquet at the Cortez Elks Lodge this past weekend, a record number of 14 trophy saddles were awarded. In addition to a saddle, White received two trophy buckles and the prestigious John Boyd Sr. Memorial Award – an award that reinforces White’s participation in the Women’s Professional Rodeo Association.

Earlier White advised the youth “Listen to your parents. They are right even though it is easy to think they aren’t right. I learned that our parents’ goals are never to fail their children by advising us to make good decisions. All they want is the best for us by pushing us beyond our potentials, especially when we want to quit.”

Tsosie, who received the Boyd Memorial Award in 2004, successfully fulfilled his Professional Rodeo Cowboy Association permit this past year and, along with several Navajo cowboys, should be contending at the PRCA Turquoise Circuit Finals Rodeo in Lake Havasu on Jan. 20-22.

There will be a follow-up AIRCA rodeo sponsors meeting and pot-luck luncheon on Saturday, January 21, 2006 in Window Rock, Arizona at a specific place and time to be announced. While 12 AIRCA hosted rodeos for 2006 have already been lined up, all rodeo committees who wish to have AIRCA sanction their rodeos are welcome to the upcoming meeting.

The purpose of AIRCA’s recognition of the communication team that helps market and promotes the AIRCA is to cultivate a positive partnership between AIRCA and each media outlet. Each year the number of the radio stations, press, websites, television and other media has grown in direct proportion to the widening of the exposure of AIRCA and its related activities.

Other recognition went to business and individual sponsors, gold card inductees (at press time, the list of inductees was still in route, however already named in the Navajo Times prior to the banquet), and various contract and rodeo personnel such as the rodeo timers, judges, and event directors. Steer Wrestling Directors Ben Bates Jr. and Harrison Charley and Tie Down Roping Director Walt Jones awarded vests and jackets to the respective events top 15.

Steer Wrestler Rob Murphy, wearing a “fight against cancer” pink ribbon, said in his touching speech “Take care of your mother as she is the anchor of a family and cowboys, no matter how tough we may be, there is a soft spot in our hearts knowing that rodeo begins in our living room where our mother resides as the foundation.”

His remarks in support of breast cancer awareness re-enforced AIRCA’s belief that rodeo is a family sport and solidified AIRCA’s community out-reach work.

The 2005 awards banquet and dance was held in conjunction with the AIRCA 2005 Xtreme Native Tour Rodeo.