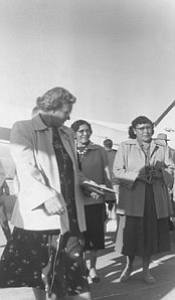 <i>Photo courtesy of Harry Lomahoma</i> <b>Ivy Norton (middle) and Minnie Lomahoma (right) were pictured with an unknown woman during one of the first flights of Frontier Airlines in Winslow.</b>

Winslow native Harry Lomahoma has donated a part of Winslow history to the Old Trails Museum, a couple pictures of a few aboard one of the first flights into Winslow Airport by the original Frontier Airlines in the mid-1900s.

The original Frontier was based out of Denver, Colo., but folded its wings in 1986 after 40 years of service. The New Jersey based People Express had purchased it.

Lomahoma's mother, Minnie, was among the first passengers to take a flight. The flight toured around the area, flying over Meteor Crater and Holbrook. Minnie worked at the Winslow Indian Health Center when it was a hospital for 35 years. Harry said she began as an aide, but was given the chance to take classes to learn how to sterilize instruments used during operations.

Also on board that flight were Ivy Norton and her son, Gary.

In 1994, Frontier was given a new start when executives from the original company, along with some newcomers launched the company in 1994 in Denver.

Among those on one of the first flights on Frontier Airlines in Winslow were (left to right) Minnie Lomahoma, and Ivy Norton and her son Gary.