Exhibit in Scottsdale showcases 2 decades of innovation in fashion, jewelry and fine art 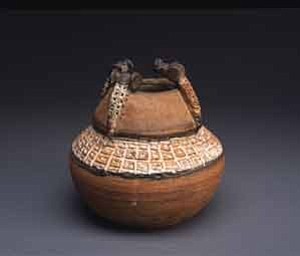 PHOENIX -- Bright orange handbags, white and purple leather jackets, sterling silver luggage tags and perfume bottles might seem to have little to do with the Heard Museum -- until you experience the new exhibition "Mid-Century Modern: Native American Art in Scottsdale."

Opening Jan. 28 at Heard Museum North, Mid-Century Modern celebrates the art and fashion of Scottsdale in the 1950s and '60s -- two decades of design and innovation by Native American artists. The exhibit will feature men's and women's designer clothing and handbags, plus, paintings, pottery and jewelry.

During this time period, Scottsdale consisted of a two-block row of storefronts resembling neo-frontier Western movie sets with knotty pine porticoes and hitching rails. But behind the Western facades, native artists were part of a prolific and thriving period of innovation and design.

The exhibition features items from the Heard's permanent collection as well as several new donations. One recent donation -- a pair of aprons -- were created from patterns and fabric designed by Lloyd Kiva New. Heard Museum volunteer docents wore the aprons during public tours at the museum. The pockets in the aprons provided a place for objects known as "touch-its" that they could share with museum visitors.

Mid-Century Modern: Native American Art in Scottsdale will be on display through Aug. 13.

The Heard Museum North is a satellite location of the Heard Museum, a private, nonprofit organization founded in 1929 by Dwight B. and Maie Bartlett Heard to house their personal collection of primarily Native American artifacts.