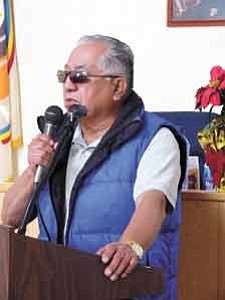 House was invited to address attendants of the training by Birdsprings Chapter Delegate Thomas Walker Jr. as part of his effort to encourage positive working relationships

House was born in the old Leupp hospital and raised in Winslow.

"My name should be Begay," he joked during his introduction. "My father's name was Begay, but he changed his name to my mother's name. If I'd been a Begay, I'd have had a lot of jobs in Window Rock."

House worked for various entities within the Navajo Tribal government for over 30 years, retiring in 1995.

"I got tired of loafing," House said of acquiring the position of executive director.

He had returned to Winslow, and Alice's Place was in need of a director. House was encouraged to take the job.

"It is hard to get started," House said of the new shelter, which he has headed since late 2004. "I'd been gone for a long time. People didn't know who I was."

He said he also lacked support from the mayor and city administrator of Winslow--something that has changed since the recent recall election.

"A lot of people don't know what domestic violence is," House said. "Many times victims don't understand that the perpetrator likes to have control, and that control comes with intimidation.

"Every 15 seconds a woman is being beaten. That is a high number." House said. He referred to an advertisement he'd seen in the past featuring President Joe Shirley and his wife Vicki indicating that domestic violence is the number one problem on the Navajo Nation.

"With that being the case, we don't have people coming in for help--and we're here to help," House said.

Though Alice's Place has yet to establish its own shelter, House indicated that two motels in Winslow have provided rooms for victims while room is found in towns such as Payson, Show Low, Flagstaff, Gallup and Holbrook.

"Alice's Place is the only service provider in Navajo County, from Bitahochee to Leupp, yet women are not coming forward."

House, who also serves as the executive director of Winslow's Guidance Associates, told social workers that 95 percent of all domestic violence victims are women--and though only five percent are men, Alice's Place is there to help these victims as well.

Domestic violence is the least reported crime, according to material passed out by House. Although Alice's Place has established memorandums of agreements with various police departments including Flagstaff, Dilkon, Holbrook and Winslow, the police are not bringing victims to the shelter.

"We can't force them to come. Even when the police are called and the perpetrator temporarily removed a lot of women don't want to leave their home," House said. "There are various reasons for this. They have children in school, or they have jobs.

"I am happy to hear that the Tribal Council plans to make laws tougher, where perpetrators of domestic violence can be punished," House added. "Currently, by the time the police come, often an hour later, things have calmed down. Also men who are picked up are just released."

Recalling conversations he has had in writing technical reports and grants for the Navajo Nation, House said that he had often engaged in conversations about what could be done about alcohol and drug problems, but he hardly ever heard about domestic violence.

"I told the chief [of Navajo Nation Law Enforcement] that he needed to do something about domestic violence or it will only get worse and it has."

Statistics House shared concerning domestic violence cases he has been involved with that indicated that 65 percent of all victims were Native American, and 50 percent were Navajo.

House has been involved with traveling to different chapters on the Navajo Nation trying to inform the public and provide advertisement for his program. He thanked the training facilitators for allowing him time to make his presentation, and to thank Walker for his support.

Walker told attendees that during his journeys to and from Window Rock, he often picks up hitchhikers. From these chance encounters he receives not only company on the long drive, but often meets relatives or gains knowledge.

"They have a lot of ideas and information," Walker said.

Walker used this analogy to suggest that the various service providers represented in the training could benefit from a relationship with Alice's Place.

"Mr. House is on the same road, doing the same work we're doing," Walker said. "Let's pick him up, give him a ride. I am encouraged by the establishment of positive working relationships through kŽ ."