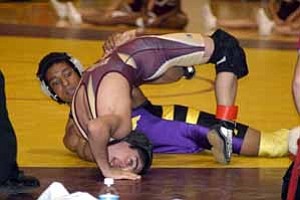 During the Doc Wright Invitational Tourney last year, host Winslow finished ninth with 118.5 points. The Bulldogs had four wrestlers place led by Enrique Vigil (seen above) in 105-pound class, and Anthony Martinez (142), each of whom placed second in their weight classes.

The Winslow High School wrestling team is enjoying one of its best seasons in years and will resume action today (Jan. 4) in a three team match at Eagar with Round Valley and Blue Ridge as its competition.

The Bulldogs have been impressive in all of their meets and own a Holbrook Invitational Championship among their accomplishments.

Winslow turned in a strong showing at the Blue Ridge Invitational as well and has served notice that this team will be a force in the 3A North Region and in the Arizona State 3A Conference Meets.

Winslow fans will have the opportunity to enjoy some of the finest wrestling action in the state when the Bulldogs host the Doc Wright Invitation Meet on Jan. 13 and 14.

For the first time in quite a few years, the Bulldogs will be a real threat to come away with the championship trophy in their own prestigious meet.

The Bulldogs have gotten stellar performances in the 2005 portion of their schedule from virtually the entire wrestling team.