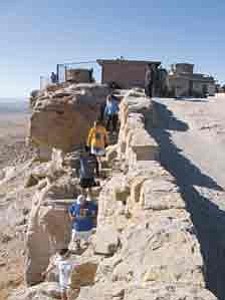 Photo by Rosanda Suetopka Thayer Hopi runners participating in the run to Mexico City train on First Mesa at the historic Village of Walpi.

They will also be a part of the historic group that will carry the message of the importance of water and its relationship to humans, plants, animals and the entire world from the Upper Village of Mungapi in Tuba City on March 3rd and will end their relay race through the states of Arizona, New Mexico, Texas and onto Mexico City on March 19th.

Though each of the12 Hopi villages will be represented, the runners were randomly selected to represent the entire Hopi Tribe and not necessarily their own individual villages.

These outstanding Hopi runners will meet up in New Mexico with runners from all the 19 eastern Pueblo cultures and one Navajo runner from Eastern Arizona to complete the entire relay.

All of these runners have been training rigorously in anticipation of this world event, many of which can be seen running through the Hopi reservation.

These runners can be seen daily in the chilly, early morning air or at sunset, facing the cold bracing evening breezes running through our cornfields, village roadsides and into the sandy hills nestled up against the mesas that boast a very high and thin, pristine air elevation.

Their heavy training is about to pay off.

Each runner will carry the prayers, good thoughts and the water significant culture of the Hopi Tribe along with them towards the final end goal.

Carrying this message from the Hopi Tribe and the mesas, which is considered the Center of the Universe by many other tribal groups, are runners from :

Events are still being planned to help provide financial sponsorship to each runner, which includes, travel, lodging and incidental expenses and each village and local community are asked to help support these brave world class runners.

The 27 Hopi runners will return home to the Hopi Reservation, by plane on March 19 with air fare graciously provided by America West Airlines and Southwest Airlines in support of this historic indigenous running event.

The relay is scheduled to be in measured quarter mile increments for the entire race.

An initial traditional blessing will be given at the when the runners leave from Lower Mungapi Village located next to Tuba City the morning of March 3.

Once the Hopi to Mexico City runners arrive at the First Mesa area on the evening of March 3, additional good will blessings will also take place for the 27 participants.

A potluck send off meal is being planned at the Mungapi Community Center in Tuba City for the runners along with their family members along with Black Mesa Trust members, H2opi members and interested parties who would like to send the selected Hopi runners off with good wishes and prayers the evening of March 2, 2006.

Contact Esther Masayesva-Skrelunas for more information on this start up event, at 928-380-9383.

Banners that will have the water covenant declaration will be premiered at that opening event and will say: " Water Sustains all life. Her songs begin in the tiniest of raindrops, transform into flowing rivers, travel to majestic oceans and thundering clouds and back to earth to begin again. When water is threatened, all living things are threatened."

Monetary sponsorships are still available. Send them payable to the Black Mesa Trust c/o H2opi Run and mailed to : Black Mesa Trust, P.O. Box 30456, Flagstaff, Arizona. (a $10 fee will be assessed on any returned checks.)

Black Mesa Trust is a 501(c)3 environmental advocacy organization dedicated to the learning and teaching of the importance of water.

For additional information about the event, sponsorship or coordination, contact Rachel Scott at 928-734-9255 or through email at: Vbmasayesva@aol.com or through kuuyi@aol.com.

(This article originally appeared in the Hopi Tutuveni)