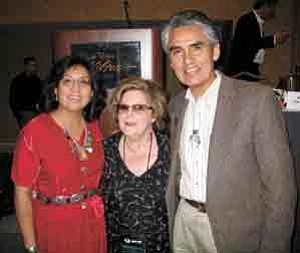 LAS VEGAS -- In recognition of his efforts to promote information, communications and technology among indigenous nations around the world, Navajo Nation President Joe Shirley Jr. was presented with the 2006 American Indian Tribal Leadership Award at the RES2006 conference here last week.

Among the dozens of government and tribal speakers was U.S. Interior Secretary Gale Norton and Agriculture Under Secretary for Rural Development Thomas Dorr. Also appearing was Ohkay Owingeh Governor Joe Garcia, who is the new president of the National Congress of American Indians, Tex Hall, chairman of the Mandan, Hidatsa and Arikara Nation and former NCAI president, and Ernest Stevens, chairman of the National Indian Gaming Association.

"The world is changing," Under Secretary Dorr said in a keynote address. "New technologies, new opportunities are transforming rural America, making it a land of opportunity. IT is producing the most radical decentralization of information in human history. Today, data can be shared easily across great distances."

President Shirley was presented with the leadership award by NCAIED Chairman Ronald J. Solimon, a member of the Laguna Pueblo, and NCAIED President Kenneth E. Robbins, a member of the Standing Rock Sioux Tribe.

"ICT is a reality for us," the President said in a keynote following the presentation. "I've seen and know that the availability of information, communication and technology will advance the quality of life for all of our people. We are now the largest wireless communications network in the world by far."

The President said that when the Navajo Nation's wireless, satellite-based project began in 2002, only 22 percent of Navajo families had telephones, only 15 percent has computers and only 10 percent has internet access.

Today, any Navajo who wants an e-mail address can have one for free, and free wireless access is available at all 110 Navajo chapters.

"Everywhere across our lands people are using this technology to take distance education classes, e-commerce, communicate with family and friends," he said. "Many of my people are getting bachelor degrees, even master's degrees, at home."

He said degrees and education are the means to independence and sustaining oneself. That1s what the internet has done for Navajos, he said.

Companies like Overstock.com and Worldstock.com have opened new avenues for Navajo artists to sell their jewelry, Navajo rugs, pottery and other wares," Pres. Shirley said.

"The Navajo Nation has demonstrated to the world that a people who value culture, language, and tradition can use satellite and wireless technology to help maintain their way of life," he said.

Last November, President Shirley was invited to Tunis, Tunisia, by the Observatory for Cultural and Audiovisual Communications. There he and Navajo Nation Council delegates Ervin Keeswood, chairman of the Navajo Government Services Committee, and George Arthur, chairman of the Navajo Resources Committee, signed two MOUs with OCCAM and the International Telecommunication Union.

This established the Navajo Nation as the first indigenous nation to become a formal member of the ITU, which is a United Nations organization.

In addition, the World Summit on the Information Society Indigenous Steering

Committee asked President Shirley to represent the world1s 370 million indigenous people at the summit before the UN General Assembly.

"The MOUs between OCCAM and Navajo Nation is an important step toward partnering with others to replicate our experience with the rest of the world," Dr. Shirley said.

Both he and First Lady Vikki Shirley spoke on a panel titled "Technologies to Build Stronger Communities." The panel discussed how tribal communities deliver these technologies to their people through wireless broadband applications, highlighting the projects discussed in the previous sessions.

"My vision, my hope, is simply this: that many world leaders will come to see the primary role of Indigenous people, with the Navajo Nation as the example, as the incubators of the human spirit, rather than factories for the production of more material goods and services." Vikki Shirley said. "This is true self-sustainability and sovereignty."

Coordinating the conference's Communication Technologies session was Nancy Plon, who has worked for the Federal Communications Commission for more than 20 years. She is the FCC's Project Coordinator for the Federal Rural Wireless Outreach Initiative. This is a partnership between the U.S. Dept. of Agriculture rural Utilities Service and the FCC1s Wireless Telecommunications Bureau.

Her efforts to expedite the development of wireless communications throughout rural areas will benefit native nations who currently lack access to the internet and the economic and social opportunities they provide.

Because of her work, she was presented with the RES2006 Volunteer of the Year Award for the fourth year in a row.

• Technologies that Empower Business Success: This panel discussed how Native American enterprises have kept their competitive edge by adapting technologies to their business needs, how they financed these technologies, and how the technologies produce returns on their investments through increased productivity.

¥• Technologies to Promote Education and Preserve Tribal Culture: The panel discussed how tribal schools and colleges use technology to bring teachers into the classroom, provide technical training and facilitate on-line research, and how tribal museums, language programs and cultural preservation initiatives use technology to preserve tribal cultural traditions.