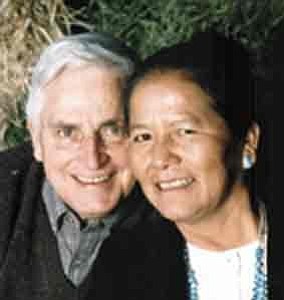 Courtesy Photo The late Dr. Robert A. Roessel and his wife Ruth Roessel

WINDOW ROCK -- The Navajo Nation has lost a towering figure in education who inspired three generations of Navajo students and their parents, and who helped make Navajo language, culture and history world-renowned throughout academic circles.

Dr. Robert Alfred Roessel, Jr., of Round Rock, Ariz., died Thursday evening at Southwest Memorial Hospital in Cortez, Colo., of complications of cancer. He was 79.

"Our Navajo family has truly lost one of our sons, one of our brothers -- Dr. Robert Roessel," said Navajo Nation President Joe Shirley Jr. "Dr. Roessel came to our land as a young man and embraced our culture with his whole heart. Then he taught us, one after another, to love who we are as individuals, as a people and as a culture. The meaning of his life was to teach the Navajo people to love the wisdom and teachings of our medicine people and to combine that with the highest attainment of academic achievement so that we could live true sovereignty as individuals and as a nation. He took immense pride when his own Navajo students went on to achieve a college degree. He will be deeply missed."

A memorial service was held at 1 p.m. on Feb. 19, at the Round Rock Elementary School gym in Round Rock, Ariz.

Dr. Roessel was born in St. Louis, Mo., on Aug. 26, 1926. He received his bachelor's and master's degrees from Washington University in St. Louis and his doctorate in education from Arizona State University.

In 1950, his 55-year-long career in education began when he arrived on the Navajo Nation.

In 1966, he founded the Rough Rock Demonstration School -- now the Rough Rock Community School -- on a foundation of Navajo language, history and culture along with academics. He returned to the helm of the school in 1997 as executive director and was succeeded by his son Monty. The school will celebrate its 40th anniversary this June.

He personally knew every Navajo chairman and president back to Navajo Tribal Chairman Paul Jones, as well as countless Navajo Nation Council delegates and chapter officials across the Navajo Nation.

Among his voluminous writings were the books "Pictorial History of the Navajo from 1860 to 1910," "Navajo Education: Its Problems and Progress," and "Indian Communities in Action."

In 1999, he was inducted into the Arizona State University Hall of Fame. Last October, ASU honored him with its Lifetime Achievement Award. He was a professor of education at ASU. He served on the editorial board of the Journal of American Indian Education.

He was appointed to the War on Poverty Presidential Task Force and World Poverty Task Force by President Lyndon Johnson.

At a community meeting at the Round Rock Chapter House on Feb. 17, Dr. Roessel was remembered as a pillar of inspiration and strength to the Navajo people, a man with a booming voice, boundless energy, strong opinions and a big heart.

"He learned our ways and turned around and taught us our ways, who we are, and taught our children and they graduated," said Walter Sandoval of Lukachukai. "He taught not just the family but the whole Navajo Nation. He had wisdom and respect for our ways. It's because of him we were mentioned and respected."

Dr. Roessel was passionate about Navajo culture and education and was unequaled as its advocate. He was among the first to call for the creation of a Navajo Department of Education, something that came to be last year when the Navajo Nation Council amended its education code.

He mentored thousands of Navajo students, as well as staff who worked under him, about the importance of knowing their grandparents1 teachings, using the Navajo language and living the Navajo culture in their daily lives.

Numerous people said he, even as a non-Navajo, taught them what it meant to be a Navajo, to take pride in who they were, to cherish a strong work ethic, and to seek answers within the Navajo culture. The community of Round Rock saw him as a Navajo elder, addressed him as Tsinigine clan and acknowledged that he embodied Navajo teachings in his own life. They said that he believed that the Navajo Holy People were with him every day.

Dr. Roessel is survived by his wife and academic partner of 50 years, Ruth Roessel, president of the Round Rock Chapter, and their five children; Faith, a lawyer, of Bethesda, Md., Mary, a psychiatrist in Santa Fe, N.M., Robert, an engineer in Phoenix, Raymond, a hydro-geologist in Phoenix, Monty, executive director of the Rough Rock Community School in Rough Rock, Ariz.; a sister, Mary Engle of Bismarck, N.D., numerous in-laws and 12 grandchildren.