U CAN 2: A pathway to a medical profession
TC Regional Health Care Corporation spotlight on Bahe 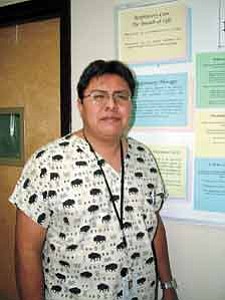 TUBA CITY -- Earl Bahe has been a respiratory therapist for almost 15 years and is currently the Lead Respiratory Therapist at Tuba City Regional Health Care Corporation.

After graduating from Chinle High School, he went to Phoenix to attend and graduate from GateWay Community College. He has worked for the Tuba City Hospital on and off for 11 of the 15 years of his career.

Bahe was asked what brought him to Tuba City and his response was, "Tuba City hospital has been good to me and the previous RT Manager was a good person to work for. I made friends in my previous tenure at the hospital, so it only made sense to return to Tuba City. Besides, they always throw you a good party even though they know you're going to return someday!"

Bahe said that what he likes about his job is the interaction with patients and working with the hospital employees.

"Personalities are varied and everyone always had a good joke or tale to tell," he said. "The learning aspect of my job is crucial in developing an effective and enjoyable work relationship with my co-workers."

Bahe said he has no regrets on choosing a career as a respiratory therapist and he offers words of inspiration to youth and anyone aspiring a career in the health field: "The healthcare industry is a rapidly growing field, therefore we need highly qualified and motivated individuals to continue to improve and further develop our quality of care to our growing patient population," he said. "The youth need to "step up to the plate" and start fulfilling their potential because one cannot stand idly by and allow the world to pass by. Only through our actions can we accomplish our desired goals and dreams. It is nice to dream, however, it's better and more fulfilling to make it a reality."

Anyone who would like more information about various medical professions such as a doctor, nurse, pharmacist, X-ray technician or medical lab technologist,please contact LT. Stephen D. Navarro at 928-283-2710, Michelle Francis at 928-283-2041 or LT. Shannon Newland at 928-283-2598.