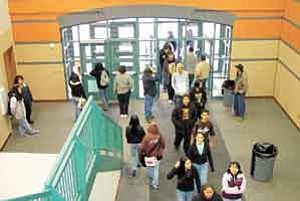 TUBA CITY -- It's big, it's beautiful and it now rivals the mirrored Warrior Pavilion as the new crown jewel in buildings at Tuba City High School on the southern end of Warrior Drive in Tuba City's east end.

The newest construction project completed on a tightly adhered to timeline for Tuba City Unified School District, which currently oversees seven separate school facilities from kindergarten through 12th grade, including the new Alternative High School in north Tuba, is a two-story facility. It houses 17 classrooms, a student and staff lecture hall with state-of-the-art audio-visual equipment and includes an entire wing to house the formal high school reception area with separate office spaces for every counselor at the high school as well as private offices for the principal, assistant principal, dean of students, dean of student staffers and the isolated study supervisor.

The atmosphere in this new building which has incorporated extraordinary masonry work in varied local stone colors, contemporary design tile work in the bathroom and water fountains, exotic wood blends utilized in a 40-foot counter desk for the formal reception area and soft soothing wall paint colors is that of a very large off-reservation area high school or small college.

It's very spacious and airy. In the second floor classroom area, there are very large windows that show panoramic views both the Tuba City and the Hopi-Mungapi areas.

Formal groundbreaking for the new building project was held in March 2005 and right on schedule as predicted by Oakland Construction, it was formally dedicated on Jan. 26. A private traditional Navajo blessing was held in the early morning that day before the students and public were allowed into the new building to tour and see what the $6.5 million that was spent on this new building paid for.

They were not disappointed.

There were lots of oohs and ahs, and one comment from a Tuba City High School freshman was, "I used to ditch a lot of school before this building went up, but I am going to come to school in this new building every day now."

This new facility resulted from a 2002 fire in the ROTC storage room, which damaged much of the original building that also housed an Olympic sized swimming pool, the old gym and locker room areas.

They along with former governing board members, Judy Secody, Helen Webster and current board members, President Marsha Griffin, Clerk Linda Honahni, members, Alvin Harvey, Priscilla Kanaswood and Jack Begay were also acknowledged in the morning ceremony for realizing this new building that will enhance the educational pursuits of the almost 950 students who currently attend Tuba City High School.

The last part of the construction funding came directly from TCUSD investment resources managed by Begay.

Phase 3 of the upcoming project will be funded by a Federal Impact Aid Grant.

Both Lady Warriors and Warrior students, TC High staff members and support personnel have been extremely patient in the almost yearlong construction project, which included walking through makeshift, very long and narrow, classroom hallways constructed of plywood dubbed "the Green Mile" by its student population.

The next phase of construction for additional classrooms and office spaces will start immediately and, when completed, will make Tuba City High School the largest reservation high school in northern Arizona.

For more information about the new wing at Tuba City High School or for a formal tour of the new facility, call Ron Begay, support service director at TC District, 928-283-1167, or the Tuba City District Office of Public Relations at 928-283-1072.