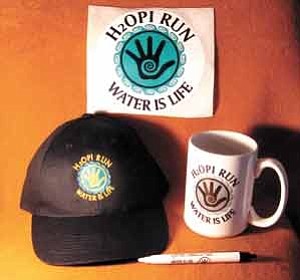 Photo by Esther Masayesva-Skrelunas Seven different items are currently being marketed both on and off the Navajo and Hopi reservation to help the H2opi Run Committee raise the travel expense funds to sponsor 27 Hopi runners who will make the historic relay race from Hopi villages of Mungapi-Tuba City, Arizona to Mexico City in March.

It will be a historic world event, one filled with deep emotion, indigenous pride and sheer physical endurance as the Hopi runners deliver traditional and contemporary messages of water's importance to the entire world.

They are all Hopi tribal members, ranging in age from 12 to 70 years old and will participate in a historic relay race from Tuba City-Mungapi Villages (Fourth World) to Mexico City in March 2006.

Each runner will deliver traditional messages, lessons and songs of water that have been gathered from native leaders from all over the world that convey the simple fact that water sustains all life.

Banners are being designed that will carry the sacred water covenant message in several foreign languages as well as songs that have been created in honor of this significant world event.

The brief water covenant is printed on all T-shirt and sweatshirt products that Black Mesa Trust and the H2opi Committee is selling to help raise relay participants funds for transportation, meal and lodging expenses states:

"Water sustains all life. Her songs begin in the tiniest of raindrops, transform into flowing rivers, travel to majestic oceans and thundering clouds and back to earth to begin again. When water is threatened, all livings things are threatened."

The run will also celebrate the recent success of a grassroots publicity campaign that assisted in stopping Peabody Coal's pumping of pristine N-aquifer groundwater that underlies Native American homelands in order to operate a coal slurry line.

Prices for short sleeve shirts in many colors are $15. Long sleeve commemorative Hopi to Mexico City T-shirts are $20. Hooded sweatshirts, all colors are $40. Mugs are $8. Caps are $10. Stickers are $2 and Pens are $1.

These products are being sold both on the Western Area reservation and off-reservation areas. They can be purchased by contacting any of the following committee members. Ruben Saufkie-H2opi Run Coordinator at 928-734-5438. Esther Masyesva-Skrelunas at 928-380-9383 or Twila Gaseoma at 928-738-0309.

Or log onto the web and get information about the run and its fundraising activity at: www.h2opirun.org or www.blackmesatrust.org.

Monetary gifts for corporate sponsorship or individual contribution can be made payable to: Black Mesa Trust c/o H2opi Run and mailed to Black Mesa Trust, P.O. Box 30456, Flagstaff, Arizona. (A $10 fee will be assessed on any returned checks.)

Black Mesa Trust is a 501 (c) 3 environmental advocacy organization dedicated to learning and teaching about messages of water.

Currently the list of runners to make this historic relay race in March are from:

There are additional local fund-raising activities being planned for the entire month of February that will happen around both the Western Navajo Reservation and the Hopi Reservation communities. For updates on fundraising activity, call Esther Masayesva Skrelunas at 928-380-9383.