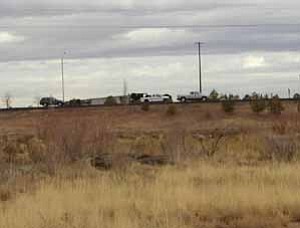 <i>Photo by Katie Stewart</i> <b>A Honduras man was killed in a three-vehicle accident near the Transcon Lane exit during the sudden freeze last week.</b>

Several accidents along Interstate 40 last week were attributed to a sudden freeze after icy rain fell for just a few short minutes.

According to the Arizona Department of Public Safety, approximately nine accidents occurred in the surrounding area, including one fatality near the Transcon Lane exit.

A 2006 White Dodge Van, driven by Jose Gerardo Tabora-Bonilla, was pulled off of I-40, and according to DPS reports, a passenger had left the vehicle and was in the median to flag down another vehicle traveling with them.

The other vehicle, a 1997 green Honda driven by Hector Soriano, pulled off and was able to stop on the icy road. Seconds later, a 2001 black freight truck, driven by Randhawa Jaswant Singh of Brampton, Ont., lost control and side swiped both vehicles.

The semi then crossed both lanes of traffic, overturned and came to stop in the median.

The truck was carrying a full load of Romaine and Iceberg lettuce.

According to witnesses, Soriano got out of the Honda, walked a few feet and collapsed. He was pronounced dead at the scene.

There were five occupants in the van and four in the Honda, all from Honduras. The passenger in the median was unhurt, and all other eight were taken to hospitals with injuries ranging from cuts and bruises to back injuries.

It is unknown if seat belts were in use.

The investigation is still pending, and upon the outcome, charges may be filed.

At least six citations were filed for failures to control vehicles. Winslow Police Department and the Arizona State Parks officers helped with some investigations.

A Concho man was killed in a two-vehicle accident on State Route 61.

According to the report, Carl E. Dye was traveling in a 2000 Chevy pickup when he lost control and slid into the second vehicle, a 1995 GMC van, driven by Keith E. Gore of Show Low.

A passenger, John P. Dye, was pronounced dead at the scene.

Seat belts were not in use and in the officer's opinion, would not have prevented the fatality.

A Milwaukee man was killed in a two-vehicle accident on U.S. 160 near Kayenta.

According to the report, a 1998 Chevy van, driven by Carlos Silos of Hidalgo, Mexico, was traveling eastbound when he lost control and crossed the center line striking a 1990 Subaru station wagon, driven by Fortino Bautista, head on.

Bautista was pronounced dead at the scene.

Eleven passengers in the van were treated and released, or taken to Phoenix Good Samaritan Hospital.

According to the report, seat belts were not in use, and would not have prevented the fatality.