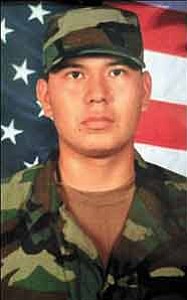 WINDOW ROCK — On Jan. 26, Navajo Nation President Joe Shirley Jr. proclaimed that flags on the Navajo Nation be flown at half-staff from Jan. 30 through Feb. 2 in honor and remembrance of the late U.S. Army Sgt. Clifton Yazzie, who was recently killed in Iraq.

“The Navajo Nation unites and offers prayers for his family during this time of grief,” President Shirley said.

Sgt. Yazzie, 23, of Fruitland, N.M., was one of three soldiers killed Jan. 20 by a roadside bomb while on patrol in Al Huwijah, Iraq. He was with the 101st Airborne Division and was serving his second tour of duty.

“It is with deep regret that we have now learned of the latest fallen Navajo soldier, Sgt. Clifton Yazzie, who had been serving on his second tour of Iraq with the U.S. Army’s 101st Airborne Division,” Speaker Morgan said. “The Navajo Nation is once again in a state of mourning the loss of a fallen hero. We have much to understand from the daily sacrifices of all our soldiers as they perform their duties in defense of our great country, as well as our own Navajo Nation.

He urged the Dine people to keep praying for all members of the military and their families.

“I send condolences to the family of Sergeant Yazzie, who was a member of a specially-trained elite team of the United States Army,” Speaker Morgan said.. “Despite the loss, I personally am very proud of his achievements and his interest to be the best of the best. Indeed he is our hero to be long remembered.”

A funeral service for Sgt. Yazzie was held Jan. 28, at the Farmington Civic Center. Burial was at the Green Lawn Cemetery in Farmington in Farmington. N.M.

Sgt. Yazzie was married to Michelle Yazzie and was the father of two children, Chaynitta, 3, and Cayden, 18 months.

He was a 2001 graduate of Kirtland Central High School and was a member of the state championship basketball team in his senior year. Sgt. Yazzie belonged to Apostolic Faith Tabernacle in Fruitland.

A special account has been set up at the Four Corners Credit Union in Kirtland.