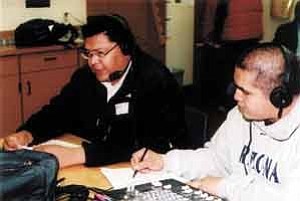 Photo by Stan Bindell Milton Bluehouse Jr., left, the new executive director of the Arizona Commission on Indian Affairs made a guest appearance on the KUYI radioÕs ÒHopi High Teen ShowÓ Jan. 26. With him is Hopi High student Andrew Salazar.

POLACCA -- The new executive director of the Arizona Commission on Indian Affairs said he would like to see his agency emulate its counterpart in New Mexico.

Milton Bluehouse Jr., who was appointed to the post about eight weeks ago by Arizona Gov. Janet Napolitano, said he has a vision that would bring more funding, more staff and a policy agenda to the Arizona Commission of Indian Affairs.

Bluehouse, a Navajo from Ganado, made his comments while visiting Hopi Jr/Sr High School Jan. 26. He was accompanied by Paul Nosie Jr., chairman of the board for ACIA; and Vera Phillips, director of special projects for ACIA.

The trio came to Hopi High to be interviewed on the "Hopi High Teen Show" on KUYI radio, the Hopi community radio station.

Bluehouse also spoke to a government class and the trio spoke to the Hopi High journalism class as well as meeting with student activist Marshall Masayesva.

He said this was the first time that he has spoken to a large group of native youth since being appointed.

Bluehouse said the ACIA is concerned about addressing many issues including health care, veterans' health and voting.

Arizona voters passed Proposition 200 in the last election with the intention of keeping illegal immigrants from voting. He said this may have the unintended consequence of keeping many Native Americans from voting because the law calls for voters to produce either driver's licenses, another form of proper identification showing address or utility bills.

Bluehouse said citizens are often disenfranchised if they don't vote.

"So many decisions are made by elected officials. They can send you to war. They can start or end social programs. You need to express yourself and participate in government," he told the students.

Bluehouse said elected officials make decisions on everything from crime to jobs to water.

"When I was in Ganado, I voted for an official because he was able to get water pipes put in," he said.

Bluehouse said he will be meeting with the Arizona Secretary of State's office to ask for assurances that Native Americans will be able to vote.

He said he is always looking for more youth involvement in Indian issues.

Bluehouse said as the new executive director ACIA that one of his tasks is improving relations between the state and the tribe. He said part of that is educating people in the state about the tribes.

"A lot of people think we still live in teepees. It isn't that they are anti-Indian. It's that they just don't know," he said.

The ACIA is also planning an Indian town hall in June to address cultural preservation issues, such as the controversy with the planned expansion of the Snowbowl in Flagstaff. Nosie said the San Carlos face similar problems with Mount Graham and the Tohono O'Odham with Kitt Peak.

The exact date and location of this town hall has not been established.

Since taking the post, Bluehouse has traveled 7,000 miles as he has visited the Hopi, Navajo, Cocopah, Gila River and Colorado River Indian Tribe reservations.

Nosie heads the nine-member ACIA governing board, but he is also the director of corrections for the San Carlos Tribe so he is well aware that tribes throughout the state, including Hopi and San Carlos, are having a crisis with youth detention facilities.

Many have been ruled unsafe and been closed by the federal government leaving the tribes with having to send the youth out of state to be incarcerated. Tribes hesitate to do this and only the most serious offenders get sent.

He said youth detention is especially important because of the problems with meth on reservations throughout the country. He added that these problems have to be addressed in a holistic manner and that everything starts from the home.

Nosie recounted how he met one young man who was "fried" on meth, but there were no services to deal with him on the San Carlos Reservation and no money to send him elsewhere.

Nosie, a member of the San Carlos Tribe, said the trio met with officials from the Hopi Cultural Preservation Office and some Hopi Tribal Council members to learn about the issues that Hopi wants to have addressed.

Nosie praised Arizona Gov. Janet Napolitano for doing a good job of working with the tribes.

Nosie urged the students to never give up.

"When you get knocked down, get back up. When a friend gets knocked down then help them up," he said.

Phillips has worked for the state for 13 years including five years with ACIA. She recently coordinated Tribal Legislative Day and has other projects planned such as the Indian town hall and a special program addressing meth use on the reservations along with other projects.

"My job comes from the heart. It's not about how much money you make. Sometimes you have to pay for things out of your own pocket," she said.

The trio praised the Hopi High radio and journalism students. Nosie said he was impressed.

"You don't see youth do this much," he said about the radio show. "I was nervous (when I was on the air) and I shouldn't have been because as a former DPS officer I've been interviewed in the courts a lot."

Bluehouse, who previously served as a columnist for the Navajo Times, said he was impressed and encouraged the students to keep up their work because there are few Native American journalists.

Phillips, a Navajo from Whitecone, said the students did a wonderful job.

"I wished when I was growing up that my high school had something like this, but it didn't," she said.