Wiseman Aviation rolls out the red carpet for Winslow
Many in the aviation community rate Wiseman Aviation among the best due to their high level of customer service and professional quality in the industry. Wiseman sees this as an opportunity to help W 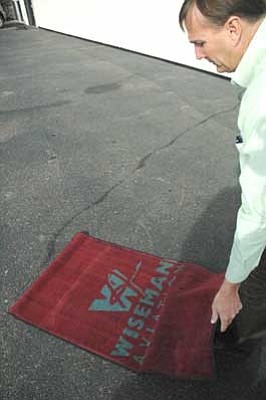 "The City of Winslow will be in a much better situation under this new kind of contract," said Winslow City Administrator Jim Ferguson.

The previous airport operator was not charged a fee for running its business at the airport. However, Wiseman Aviation will pay a lease to the city.

"If they make any lease holding improvements, we will give that consideration in the lease," Ferguson said. "That is typical with many commercial leases."

The contract negotiations are expected to be complete by Jan. 15.

In regard to issues concerning the Winslow Lindbergh Airport terminal's historic and/or structural status‹including a poor location that blocks the taxiway and the airport's ability to receive Federal Aviation Administration (FAA) grants‹all will be dealt with in 2007 by the Airport Commission as they update the Airport Master Plan, Ferguson said.

"The hanger can certainly be put on the National Historic Register, but as far as the terminal is concerned, it may not even be achievable, because it has been altered so much already."

Orville Wiseman, president and founder of Wiseman Aviation, said that the citizens of Winslow will be pleased with what he will do for the airport and community.

Wiseman was born and raised in Tucson and has a bachelor's degree in accounting from Northern Arizona University (NAU) and master's in aeronautical science from Embry Riddle Aeronautical University.

Wiseman is a member of the National Air Transportation Association and Aircraft and Pilots Association‹and attends many related trade shows and conventions to promote his business.

Wiseman is also a treasurer of the Greater Flagstaff Economic Council and is on the NAU School of Business College Advisory Board.

Before coming back to Flagstaff, Wiseman was chief pilot and director of flight operations for a corporation in Dayton, Ohio, and before that was a flight instructor and professional pilot.

"People shouldn't think that I am hunkered down in Flagstaff and only in this to benefit my business here," Wiseman said. "This place has got its problems, for example I know that my kids will not be able to afford to live here," he said.

He said he would even look into buying a home to live in part-time while he is in Winslow working at the airport.

"Winslow has resurrected itself in recent years, and I'd like to be a part of that," he said.

When presenting to City Council and the Airport Commission, Wiseman said he plans to promote Winslow more to traveling pilots and to those attending flying and pilot conventions.

Part of his business plan is to create strategic alliances with the business community abroad and in Winslow. He said he has had talks with W.L. Gore, the huge high-tech manufacturing company with a branch in Flagstaff, about driving their employees to Winslow in order to fly them out to research locations.

"Honeywell was interested in testing in Winslow at one time, but nobody really talked to them, so they ended up coming to Flagstaff," he said.

Wiseman already has a good working relationship with Don Walters, owner of Arizona Restoration Products, who is proposing to build a $378 million Oriented Strand Board Facility next to the Winslow Airport.

One of the things Wiseman does in Flagstaff that can be expected in Winslow is establishing the position for a receptionist to be on staff. This person would be responsible for setting up hotel, restaurant and car reservations for pilots landing in Winslow.

Wiseman said he will be looking to hire receptionists and line service workers for full-time and part-time positions.

This business in Winslow will not be secondary to that of Flagstaff, as the purpose of his business is to make money. When I started in Flagstaff in 1999, fuel sales were at 300,000 gallons a year, he said.

"I kept hearing about a 'vision for Winslow' at the Council meeting I went to," Wiseman said. "One definitely has to have vision in this industry to survive and I think we have that."

Wiseman already offered to City Council and in his talks with Ferguson, that his company would be willing to do some work to the Winslow airport terminal to make it more comfortable for visitors.

In addition to a receptionist, a more welcoming interior terminal and aggressive marketing campaign, Wiseman said he will also promote regional attractions in the area to bring in more service to the Winslow airport‹a move that will benefit all the businesses in Winslow.

Wiseman Aviation will be receptive to working with the Winslow Community, he said, as they plan on hosting aviation events and local school field trips.

Wiseman would also like to develop aviation technologies and work with the local schools, such as the high school or community college to potentially develop a student training curriculum.

"I like to think of my business as being the portal to the community and as the community grows and companies looking to relocate visit here, we'll be the first thing they see and making a good impression is very important."