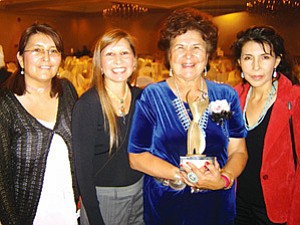 FLAGSTAFF-In recognition of her lifetime of outstanding service to the people of northern Arizona, Coconino County Supervisor Louise Yellowman was recently honored with the prestigious Athena Award.

From a group of amazing women who contribute an incredible amount of energy to the communities in which they live and work, Yellowman rose to the top due to her ability to excel in two unique societies.

"It represents harmony and balance between two worlds," Yellowman said during her acceptance speech in November at the Radisson Woodlands Hotel. "On one hand I believe in the philosophy and teachings of the Diné and am proud to represent the Diné in my work, and on the other hand, I am equally proud to represent my non-Native constituency in Coconino County."

Since 1980, Yellowman has represented District 5, which now spans from an area just south of Gray Mountain north to the Utah border, including Grand Canyon, Tuba City, Inscription House, Navajo Mountain and Page, to name a few.

Prior to that, Yellowman earned a Master's Degree in education from Northern Arizona University, then worked in the education field for 31 years.

During her work as a teacher for the Navajo Nation's Head Start division, Yellowman implemented the Navajo Bilingual Program, the need perhaps stemming from her youth as a monolingual Navajo speaker.

But when Yellowman saw the need for people living on the Navajo Reservation to be represented and have their voice heard, she decided to run for public office.

"What really struck me was the people living in the horrible condition-with the water glowing at night, people without homes," Yellowman said in an interview following the award ceremony. "My first job was to clean up the metals. A young lady came to me and said, '[L]ook at this. There's something glowing in the water. [The uranium mining companies] had been digging for the yellow cake, and the safety was not there. Kids were sick; people were sick," she remembered.

"That's when I needed the paper," Yellowman said.

In order to educate people about the reasons for their illnesses and the effects of uranium mining, Yellowman saw the need for a regularly circulating publication. She wrote to several publishers, and her plight finally received recognition from Jim Stub, publisher of the Page-Lake Powell Chronicle.

When Stub saw the need for a newspaper on the Navajo Nation, specifically in the Tuba City area, the Navajo Hopi Observer was established.

Yellowman worked with the Observer to inform Diné people of the reasoning behind the "glowing" water and subsequent illnesses. Soon, nearly 4,000 signatures were gathered and forwarded to the Environmental Protection Agency (EPA). In response, EPA officials visited the Navajo Nation to witness and record the effects of uranium mining upon the people and earth.

These efforts were successful in bringing light to the unique effects of uranium mining upon Diné people. Treating their symptoms was prioritized and the Navajo Nation was added to the national register.

Through this education, Diné people began to be compensated for the effects of uranium mining on their lives, Yellowman explained.

In addition to this feat, Yellowman instigated the establishment of the first Coconino County Supervisor's Office in Tuba City where local residents could voice their concerns. This office also functioned as an outlet for information where citizens could register to vote, submit Arizona Motor Vehicle Division forms and submit uranium compensation paperwork.

As a supervisor, Yellowman brought the need for schools in Cameron and the Gap to the attention of the county. She was also instrumental in the establishment of a branch of Diné College in Tuba City.

In 1988, Yellowman brought attention to the uncontained landfill in Tuba City through the Observer, local and county meetings, as well as negotiations with the Department of Health and Human Services, U.S. Senate and Bureau of Indian Affairs.

Finally, the landfill was contained and on July 14, 1997, the Tuba City Sold Waste Transfer Station site began its operation between a Coconino County and Navajo Nation Joint Powers Agreement.

One of Yellowman's current projects is the establishment of community park in Tuba City. She continues to hold office hours two days each week in Tuba City, and travels to the other regions and communities in her district, as well as Flagstaff on the remaining days of the week.

She enjoys the unique position she holds as a bridge between two worlds and sees her work as part of the process of bringing harmony between these worlds.

"It is only through sharing responsibilities, power and balance that we can work together in harmony to make the Southwest the best place for our children…so I am very honored that with this award, perhaps I can inspire women of all races to believe that they can be leaders and take part in building better communities."

Athena International presented the first Athena Award in 1982 in recognition of the leadership of outstanding professional and businesswomen in each community. The nominees and recipients are women who have demonstrated excellence, creativity and initiative in their careers; provided valuable service to improve the quality of life for others in their community; and assisted other women in reaching their full leadership potential.

Yellowman's award was presented by the Flagstaff Chamber of Commerce.