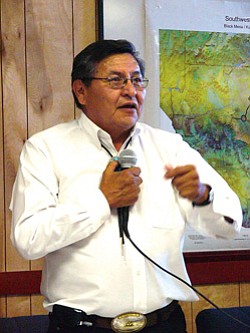 Walker promised that he would not support the efforts of the mines if it has a negative impact on the environment-something he believes Leupp faces if the C-aquifer water transmission line (which would run from the Leupp area to Black Mesa) is constructed.

He also asked that community members express their health concerns and priorities, and that domestic water and sanitation is one of the priorities of the health committee that he sits on.

Woody Smith expressed his displeasure at what he referred to as "the lies" of President Joe Shirley. Smith claimed that four years earlier, during a visit to Leupp, Shirley described the C-aquifer water study as a "feasibility study" and did not tell the residents here that the water had already been "given away."

Smith and Lacretia Black encouraged Walker to attend future chapter meetings in Leupp and to throw his support behind the community and fellow delegate Leonard Chee who is against the transmission line.

Leonard Chee's report included news that the subcommittee for water (C-aquifer) is willing to come out to Leupp again and to listen to the people. This visit could occur before January. According to Chee, the subcommittee does not support the transmission line.

Chee also expressed interest in serving on the resources committee rather than the education committee this term.

"If we use our own funds, we don't have to listen to anyone outside of the Navajo Nation," Chee said. "No big corporations, no power companies. We can develop the wells the way we want for our own agricultural, livestock and industrial uses."

Anna Frasier described the adverse effect the coal mines have had on the health of the residents of the Black Mesa area.

"We need to oppose the mine at Black Mesa in an effort to support everyone that is adversely affected by the mine activities," Frazier said. She added that the proposed C-aquifer transmission line would force 17 families from their homes in Canyon Diablo. Twenty new wells would be drilled to supply water for the Black Mesa mining activities.

Frazier looked to the effects that impacted communities at Black Mesa from the use of N-aquifer water.

"According to the people who were impacted by the use of the Navajo Aquifer, the environment was heavily impacted to where the land dried up, the natural springs dried up and sink holes developed," Frazier said.

Frazier predicted that if the Black Mesa Mine is reactivated, coal would be mined for the next 26 years, with 6.36 million tons of coal to be mined.

Calvin Johnson explained that even if the C-aquifer transmission line is established, water would not be delivered to community households as there are no funds to cover that expense available in the preferred alternative.

"Local people, especially in the Canyon Diablo area, will be impacted by noise pollution," Chee added. "Dust will be a problem, roads to homes will be heavily impacted by continuous traffic, blasting will occur, and pump stations would be located every fourth of a mile along the transmission line. Grazing areas and capacity will be impacted, the natural aesthetics will be affected, and culturally sensitive places will be affected."

Johnny K. Thompson, who served as the grazing officer for the Leupp Chapter, said that 23 people hold grazing permits along the proposed route.

"We live in a very small area," Lecretia Black pleaded to Shelly. "Please do not let money drive your decisions."

Masayesva described the current Draft EIS as "the worst I have ever seen-all because some corporations want to get rich."

He stressed the need to use tribal professional people, rather than looking to the outside world for assistance in development or in conducting feasibility studies.

"We now have a huge amount of professional people [in the Navajo and Hopi nations], and it is time we stop letting outside organizations exploit our resources," Masayesva said.

Masayesva also warned attendees that the year 2026 (when the mining would theoretically end according to the proposed EIS) would not be the end of the mine. As long as there is still coal to be mined, they can continue mining, Masayesva said.

He also criticized the fact that neither the Navajo or Hopi nation is being compensated by payment of rent or severance tax.

"Undisturbed land has worth," Masayesva said, trying to explain the concept of severance tax. "It's like automobiles. You put miles on them, their value goes down."

"They are mining free of charge," Masayesva said. "There is no severance tax."

After listening to his constituents for almost two hours, Shelly introduced himself, stating that he had served on the Navajo Nation Council for a number of years, and probably worked on the proposal to use C-aquifer water for coal slurry to the Mohave Generating Station. Further, he said that Pres. Shirley had been considered a "greenhorn" when he signed the memorandum of understanding developed by the parties that held a stake in the proposed project. Shelly admitted that he too had been ill-prepared to work on water issues.

"People from the Eastern Agency are modernized to where we want economic development," Shelly stated. "Over here people are more concerned with preserving the old way of life."

Shelly also agreed with the oft-repeated statement that "water is life."

Rosita Kelly offered that she believes that Joe Shirley was not completely ignorant of water issues when he became president.

"After all, he was a council delegate previously," Kelly said.

Chee urged Shelly to consider proposals developed for the Leupp area-proposals that have been shot down due to water issues.

"We want to develop the water into an ice plant operation and to establish a casino. We want to capitalize our resources," Chee said. "We shouldn't even be considering transmission of water to Black Mesa as long as our own community and people don't have water."

In response to a question by Loretta Todacheenie as to why Shelly was appearing at meetings instead of President Shirley or the present Vice President Frank Dayish, Jr., Shelly said that it is allowable to have the vice president elect travel on behalf of the president.

"Your local council delegates are aware of these meetings and should inform you of the results," Shelly said.

The motion to oppose the Black Mesa Project Draft Environmental Impact Statement in its entirety, with Leupp Chapter requesting that the Navajo Nation as a whole reconsider the plan that will have a negative impact on the local grassroots land users, permit holders and community members if or when the project should become a reality passed with 75 members voting in favor, none opposing and only one abstention.

Leupp Chapter President Thomas Cody said that he felt that Shelly had remained neutral on his community's issues.

"I don't feel that we got the support the people wanted to see," Cody said.

Nonetheless he was encouraged by the visit.

"He did give his assurance that he'll work with us," Cody said. "I believe he is personally a strong person, and will be strong enough to work with the president and other staff.