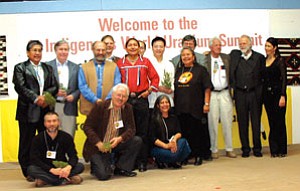 WINDOW ROCK-Six individuals, including a Navajo chapter president and a Southwestern non-profit organization, were honored on Saturday, Dec. 3 with the 2006 Nuclear-Free Future Award during the first Indigenous World Uranium Summit.

Red Valley Chapter President Phil Harrison was among the people honored for their efforts to resist the spread of nuclear proliferation and its waste while educating those their live near. Also honored was the Southwest Research and Information Center of Albuquerque which has assisted Navajos force the clean-up of closed and abandoned uranium mill tailing sites and most recently has helped prevent the re-introduction of uranium mining and processing in the Church Rock and Crownpoint, N.M., areas.

The awards were presented during a banquet at the Navajo Nation Education Center.

Claus Biegert, a German journalist and one of the founders of the Nuclear-Free Future Award, said Mr. Harrison was receiving the award because of his many years of struggle as a visionary activist, calling the uranium industry to account for its blind and poisonous greed.

Mr. Harrison began his life's work to get justice for former Navajo uranium miners after losing his father, a former miner to lung cancer in 1971. He was a founder of the Uranium Radiation Victims Committee and lobbied tirelessly for the 1990 Radiation Exposure Compensation Act, a federal law to provide compassion compensation to former Navajo uranium miners, millers and ore transporters.

However, in his address when receiving his award, Mr. Harrison said it was later learned that only 12 percent of Navajo miners had actually received their compensation, and so his work continues.

In a keynote address during the awards banquet, Navajo Nation President Joe Shirley, Jr., said the recipients of the awards were being honored for having stood before opposition and persevered.

"Sixty years ago, the United States turned to the tiny atom to unleash the most destructive force known to mankind and bring an end to World War II, he said. "Ironically, the uranium used to create the most technologically-advanced weapon ever invented came from the land of the most traditional indigenous people of North America, and was dug from the earth with picks and shovels."

He said nuclear weapons transformed the United States into the greatest military force the world has ever known, and the term "Super Power" was coined.

"Lost in the history of this era is the story of the people-the Diné-who pulled uranium out of the ground by hand, who spoke and continue to speak an ancient language, and who pray with sacred white ground corn at dawn for good things for their families," he said.

President Shirley called the era of uranium mining on Navajoland genocidal because the hazards of cancer and respiratory disease were known to doctors and federal officials, and yet they allowed Navajos to be exposed to deadly radiation to see what could happen to them.

"As a result, radiation exposure has cost the Navajo Nation the accumulated wisdom, knowledge, stories, songs and ceremonies-to say nothing of the lives-of hundreds of our people," he said. "Now, aged Navajo uranium miners and their families continue to fight the Cold War in their doctors' offices as they try to understand how the invisible killer of radiation exposure left them with many forms of cancer and other illnesses decades after leaving the uranium mines."

As a result, in 2005 the Navajo Nation passed the Diné Natural Resources Protection Act and uranium mining on Navajoland was outlawed. The law prohibits uranium mining and processing in all its forms on Navajoland and is designed to protect land and water from being contaminated as it was in the past.

The Diné Natural Resources Protection Act protects the Navajo Nation's water and land, which the Nation values more than any long-term economic benefit uranium mining might bring. It applies to all the land within Navajo Country, which includes that defined as Navajoland, trust land, allotted land or dependent communities such as Church Rock and Crownpoint where companies want to mine.

The other recipients of the 2006 Nuclear-Free Future Award were: for resistance, Sun Xiaodi of China, for education, Gordon Edwards of Canada, for solutions, Wolfgang Scheffler and Heide Hoedt of Germany, for lifetime achievement, Ed Grothus of Santa Fe, N.M., and for special recognition, the Southwest Research and Information Center of Albuquerque, N.M.