Phelps family gives thanks to supporters 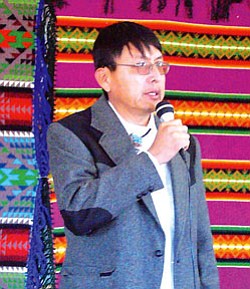 Walter Phelps speaks to supporters of the Lovejoy/Phelps campaign during a special feast hosted by friends and family members of Phelps and former Navajo Nation presidential candidate Lynda Lovejoy (Photo by S.J. Wilson/Observer).

GRAND FALLS-The family and friends of Walter Phelps threw a feast to thank all of those who supported the Lovejoy/Phelps campaign at Grand Falls on Dec. 2. Phelps' parents, Elsie and Raymond Phelps, and family members butchered and ground-oven roasted a cow to serve as the main dish. Family members offered numerous side dishes, stews and desserts.

Entertainment was provided by flute player David Montour, member of the group "Clandestine," as well as Marilyn Help-Hood and Radmilla Cody (both who formerly served as Miss Navajo Nation).

Though Lynda Lovejoy was unable to attend the event, her sisters Ann Miller and Rita Capitan came in her place.

Many individuals stood to give encouragement to the Phelps family and the team of Lovejoy/Phelps. Many wondered if this is the end of the Lovejoy/Phelps story. Only time will tell.