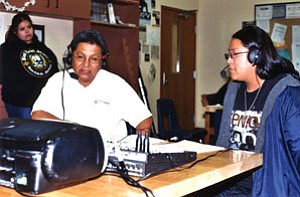 Ben Miranda (left) is interviewed by Emmalynn Thompson on KUYI (Photo by Stan Bindell/ The Observer).

POLACCA-Native Americans need to know their sovereign rights and how it impacts their tribal programs. That's the belief of Ben Nuvamsa.

Nuvamsa, who trains Native Americans throughout the U.S. about the Indian Self Determination Act, spoke to the current events, radio and journalism classes at Hopi High School on Dec. 6.

Nuvamsa was also interviewed by Emmalynn Thompson on the Hopi High Teen Show on radio station KUYI during his visit to the school.

Nuvamsa said the Indian Self Determination Act has helped tribes take over some of their programs, and added that the federal government has a strong impact on Native Americans by the laws that Congress makes and the decisions made by the U.S. Supreme Court.

"Indian laws are intertwined with federal policy," he said. "Tribes are independent with inherent powers, but that independence is subject to the powers of Congress to regulate and modify the status of the tribes."

For example, members of tribes recognized by the federal government can receive benefits such as scholarships.

A little-known fact is that Native Americans can't own land on the reservations. They can live on it, but they don't hold title to it because it's held in trust by the federal government.

"Tribes face a complex and confusing set of federal laws," he said. "Tribes are also the most regulated ethnic group in the U.S."

Nuvamsa recounted how his grandfather Bruce Tewanima and Jim Thorpe won medals for the U.S. in 1916 when they couldn't be American citizens. It wasn't until 1924 when Indians were finally granted American citizenship.

In 1934, the Indian Reorganization Act allowed the tribes to regulate themselves. In 1936, the Hopi Tribe passed its first constitution.

In 1875, the Indian Self-Determination Act allowed the tribes to take over federal programs, including day-to-day operations.

"There were promises that were not kept regarding water, health care and other issues. So, the tribes decided to take matters into their own hands," he said.

Brian Pablo, who works for Spider Mound, told the students that Spider Mound now has an art gallery at the Hopi Cultural Center.

"The gallery isn't just for us, but for [everyone] reservation-wide," Pablo said. "We also carry the art for kids from 13 years old and up."

Pablo noted that the gallery also sells Navajo art. He said this is their way of promoting the native artists.

Nuvamsa, who serves as a consultant for Spider Mound, said the community leaders see Spider Mound as the east gateway to the Hopi Reservation.

"We're planning a community with streets, but it will take time," he said.

Nuvamsa, who was superintendent for the BIA on the White Mountain Apache Reservation for 17 years, said in order to be successful that Spider Mound needs a comprehensive land use plan and strategic plan.

He noted that Spider Mound is open to any Hopis joining the community.

Pablo said only cell phones work at Spider Mound and residents can forget about getting propane deliveries when it rains or snows because the roads are so bad.

Spider Mound recently reached an agreement with the Navajo Tribal Utility Authority (NTUA) to bring water to the community. The waterline will begin in Ganado and go through Jeddito so it will also bring water to Jeddito.