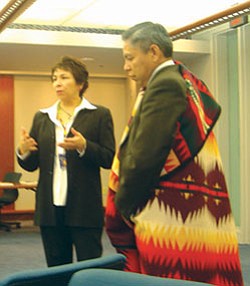 Vice President Dayish served as co-chair of the national committee. He served in this capacity for four years representing the Navajo Area.

Dayish actively advocated for education and outreach activities tailored to Indian country and promoted the use of Certificates of Indian Blood (CIB) and tribal enrollment documents as acceptable citizenship documentation for Medicaid services.

The TTAG is an advisory body to CMS providing expertise on policies, guidelines and programmatic issues affecting the delivery of health care for American Indians and Alaska Natives served by Medicare, Medicaid, and childrens' health insurance programs run by individual states.

"Vice President Dayish has been an incredible founding member of the TTAG. He has never once hesitated, never complained and has always stepped up graciously representing the TTAG at the annual federal divisional and department-wide tribal budget and policy consultation sessions advocating for AI/ANs and the Indian Health Service, tribal organizations and urban Indian programs."

Davidson added, "[He] has a wonderful way of communicating [and] has a unique ability to get everyone's attention; when he speaks, everyone in the room, whether they are federal officials or tribal representatives leaned forward and listened to him carefully, because what he has to say is meaningful, relevant and comes from the heart."

Davidson draped a colorful Pendleton robe over Dayish and said to him, "To my people, the color green represents calmness, serenity and harmony. If I were to choose a color for you, I would choose the color green."

Davidson also referred to Dayish, as "nukalpiaq," a term that Yup'ik Eskimo people use to indicate honor to a man who-no matter how difficult and harsh the conditions are-will always return from the hunt with food to share with the village.

Davidson added, "Vice President Dayish has been the TTAG's 'nukalpiaq' always prepared to go forward on a moment's notice to represent tribes in meetings with CMS and DHHS officials to bring home results."

"I was deeply honored by the expressions of appreciation given to me by my colleagues" stated Dayish.

"I have enjoyed working with my colleagues, tribal leaders, CMS administrator, Dr. Mark McClellan, former U.H.H.S. secretary Tommy Thompson, current secretary Michael Leavitt, Dr. James Grim, Dr. Broderick, Dorothy Dupree and TTAG [and] Valerie Davidson. The TTAG members continue their commitment to improve services for Native Americans throughout the United States in the area of health care and in particular for those deserving of critical services from Medicare and Medicaid," he said.

The 15-member TTAG is limited to elected tribal leaders or their designated employees, as well as representatives of Washington associations designated by Tribal leaders.