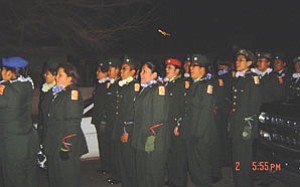 HOLBROOK-The Hopi Junior ROTC cadets were excited to march in this year's Holbrook Parade of Lights despite the cold weather that night.

The parade lasted close to two hours and the cadets were cold but determined to complete this parade because they were representing their school, people, and themselves.

During the Winslow parade on Nov.18, the JROTC placed 1st in the military category. The cadets are very proud to have received such an honored award.

As the battalion marched through the Holbrook parade, they received many comments from the community, telling them that they looked sharp, and that they are the best Junior ROTC that they have ever seen in a parade.

The cadets were very energetic and loud, letting the people who were watching the parade know that they were ready to march in this parade, regardless of the weather.

This parade was very fun for the cadets to get experienced in marching in all kinds of weather, from sunshine, to wind, and rain to snow.

Cadets are using these parades to prepare for the Hawaii Martin Luther King Day parade, which will be five miles long. So cadets have been doing a great job as far as attending parades, getting prepared for them and marching in them with loud voices and enthusiasm.