A cold march for the cold realities of suicide 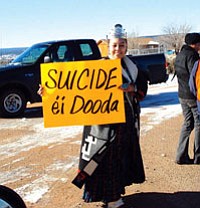 Miss Navajo Nation Jocelyn Billy holds up a sign saying “No suicide” in the Navajo language. Billy participated in a march from Fort Defiance to Window Rock on Nov. 30 to bring awareness to Navajo Nation officials regarding the serious lack of resources for suicide prevention (Photo by Amanda Moore/NNDOY).

FT. DEFIANCE-The face of suicide is an empty, bottomless chasm, which amplifies the feelings of loneliness experienced by an individual contemplating the possibility of taking one's own life. When a person is at that critical stage, where the decision to live is becoming increasingly more difficult-or even impossible-having resources and support systems to effectively bring a person out of this state of mind is imperative.

However, in many communities, few outlets exist to aid persons facing suicide.

This lack of appropriate resources is exactly the reason why approximately 30 individuals on Nov. 30 marched through the wind and snow from Ft. Defiance to Window Rock.

To bring awareness to Navajo Nation officials, as well as to the community members at large of the indicators of suicide, its wide-reaching effects and the need for services and education throughout the Navajo Nation, several individuals including Miss Navajo Nation Jocelyn Billy, personal assistant to the First Lady, Alray Nelson; Char James and Brenda Tapahe both of the Ft. Defiance Indian Health Services; several Department of Youth (DOY) Youth Opportunity Program participants; the veteran honor group, the Twin Warrior Society; as well as members from the local communities braved the weather.

"We have no hotline and no resources," Curley said. "Suicide knows no barriers; it effects all of us and something needs to be done."

Moved by their determination, several drivers stopped their cars and joined the march.

"There were a lot of people who were curious and some people did actually pull over and walk with us," Curley said. "It was very cold, but it had the effect of bringing awareness to all the people that we have no hotline and no resources."

Upon reaching Veterans Memorial Park in Window Rock, a closing ceremony was held including several speakers, a minute of silence and a candle light vigil.

Curley explained that the speeches were uniquely emotional due to the nature of the event, as well as the low turn out.

"Miss Navajo was upset, because we didn't have our leaders there. She spoke really loudly during her speech because we were right across from the tribal offices-trying to make sure that our leaders knew what was going on," Curley said.

Billy explained the dire need to set up support systems for members of the Navajo Nation to turn to in times of suicidal crisis.

When Nelson took the stage, his personal experience with his own contemplation of suicide struck the crowd.

Next, James discussed the connections between methamphetamine addiction and suicide, which she addresses each day.

Often, she said, they begin packing their things, and giving away their belongings.

"We need to understand how important it is to recognize these signs," Curley said. "We need to know what to do and what to say. We need to get everyone in the process [of aiding individuals at risk of suicide] involved so they know what to do. It's a very critical time."

Curley detailed the fact that no resources currently exist in the Navajo Nation except the hospital emergency rooms. She said that the establishment of a crisis hotline would be the first step in providing a place for individuals to alleviate feelings of hopelessness and loneliness.

To conclude the Suicide Awareness events, those in attendance were given candles, provided by Yolando Bowman and the Navajo Nation Shopping Center.

"When he gave us these candles he said, 'I didn't just want to give you any old candles. I wanted to give you something special so the people would realize how important this is,'" Curley said of Bowman's donation.

With the event's conclusion, supporters fell into embraces and tears knowing that the pain associated with suicide will continue as well as the fact that so few resources exist to help individuals, families and friends in crisis.