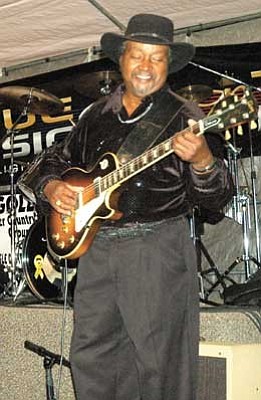 Tommy Dukes of Winslow is true Blues, and one-of-a-kind for northern Arizona. He has entertained folks around here for years, and now may be getting the recognition he has worked for all his life. He was recently selected by the Phoenix Blues Society to represent Arizona, in his second time playing, in the International Blues Challenge (IBC) in Memphis, Tenn. on this coming Feb. 1 ­ 3.

"I've got a feeling that I'll do good at this one because I got my own songs," said Dukes, a member of the Arizona Blues Hall of Fame. "And because no matter what, I am always going to be playing the Blues."

The IBC has evolved into the nation's largest and most respected showcase for Blues musicians ready to take their act to the national stage. Top Blues recording labels, Blues musicians and fans from around the world will converge on the historic Beale Street in Memphis to listen to, jam with and hang out with Blues legends like Dukes.

Some people who have seen Dukes play while on the road sometimes ask him why he lives in this rural part of the country, but this is where he has lived since he was 10-years old, and is where he picked up his first guitar.

"I'm not ashamed to say where I live. It's a small town where everybody knows everybody. I've lived here all my life and I like it," Dukes said.

He was born in Blues country, in Hattiesburg, Miss., and can still remember jumping into the back of a truck with his brother to go off and work in the cotton fields. He had no need for that life and then came out West ­ in the back of the bus as his father instructed ­ all the way into Winslow where his mother lived.

Dukes picked-up his first guitar when he was 13-years old. It came from his brother Robert Evans, who bought it from a local preacher while working at the Nagle Lumber Company in McNary, Ariz.

"Some girls down the street from me were playing Jimmy Reed 33s all day long, and that got me going," Dukes said. "I then bought my first record, Jimmy Reed's, 'Baby, You Don't Have to Go,' and could play all his tunes by that first year with my guitar."

Dukes attributes much of his style to those early days learning from Reed, as he also said that by practicing to imitate Reed's voice, gave him a Blues vocal style called "tongue-tied."

From those teen years, when shyly hiding behind the jukebox while playing for the sawmill workers at Washmack's Buffet in Pinetop, Ariz., Dukes has since blossomed. Soon after when the jealousy house known as the Prairie Moon " was jumping," Dukes could be found there playing the perfect soundtrack for a scene of railroaders and other locals of Winslow drinking, laughing, smoking, playing cards, shuffleboard and shooting pool.

Dukes has since gone on to play at many important Blues events like the King Biscuit Blues Festival in Arkansas and the Juneteenth Celebration in Flagstaff, a day of commemoration for African emancipation in America.

"Juneteenth is not only just black folks, as it is much more mixed now," Dukes said.

Dukes has drawn quite a following in the university town where he played for a crowded room every Monday night for 12 years at Charly's.

You can hear Dukes' Blues played every week on the Hopi radio station KUYI 88.1 FM or you may be able to catch him somewhere in Winslow or Flagstaff. But you better see him soon because he may become one of the biggest names in Blues after he goes to Memphis.