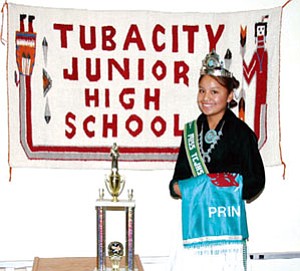 TUBA CITY-Racheal Riggs, age 13, an eighth grader and of the One-Who-Walks-Around clan born for Manygoats was chosen among several young women competitors as the new Tuba City Junior High School Princess for 2006-07 at an evening competition on October 26th. Ms. Riggs is the daughter of Larry Riggs and Tabatha Dodson and is a native of Wildcat Peak.

Ms. Riggs was selected on her ability to sing both Native American Church traditional songs. She also recited a contemporary poem titled "In Peace, In Harmony" as her modern talent, besting the other young women in the evening's competition.

A large part of the contest focused on outstanding community character traits and academics with a heavy emphasis on knowledge of cultural customs and language.

Ms. Riggs will serve a full school calendar year representing Tuba City Junior High School and can be booked for family, school or wholesome community events by contacting the TC Junior High at 928-283-1055.